Out of the mountain of despair, the stone of hope

Some concluding thoughts from my sabbatical study about slavery, civil rights, and black Christians in the southern US, as we turn to a biblical perspective:

As I consider the history of slavery and civil rights I am impressed once again by the power of biblical doctrine to explain, encompass and give value to the whole of human experience. The Christian vision of mankind points to the unique dignity and value of human beings, made in the image and likeness of God. They are the very pinnacle of creation. As the psalmist exclaims:

When I consider your heavens, the work of your fingers, the moon and the stars, which you have set in place, what is mankind that you are mindful of them, human beings that you care for them?
You have made them a little lower than the angels and crowned them with glory and honour.
You made them rulers over the works of your hands; you put everything under their feet:

In a nutshell that is why slavery is wrong. That is why the treatment meted out to blacks after the end of slavery is wrong. It simply failed to treat people in a way consistent with their human dignity and worth as beings created in the image and likeness of God. Even for administrative purposes, to treat a human being, infinitely precious in God’s sight, as 3/5ths of a person as the US Constitution appears to do, is go against the whole grain of creation, and in biblical terms, it must be seen as an act of rebellion against the creator.

Alongside the Bible’s understanding of the dignity and worth of human beings made in the image of God, is a sober estimation of the fallenness of humanity and its capacity for evil. The Apostle Paul explains that this is a universal problem affecting the whole human race when he declares ‘all have sinned and fall short of the glory of God.’  The prophet Jeremiah locates mankind’s problem in the human heart itself: “The heart is deceitful above all things, and desperately wicked’; and Jesus concurs: ‘For out of the heart come evil thoughts – murder, adultery, sexual immorality, theft, false testimony, slander. These are what defile a person.’

Beautiful human beings, made in the image of God, when they act in rebellion to their creator, are capable of the ugliest deeds, including the evils of slavery and racism.

If the Biblical vision explains why slavery is wrong and why it happened, it also points to its solution in the cross of Christ.

The cross demonstrates that sin and violence can be overcome. It offers a way, via repentance and forgiveness, to reconciliation.

As we have seen the American Civil Rights movement was heavily indebted to the Christian understanding of creation and salvation which provided the moral outrage against racism and slavery, and, especially through the influence of Martin Luther King, a distinctively Christian response to evil that encompassed non-violence, forgiveness and reconciliation. 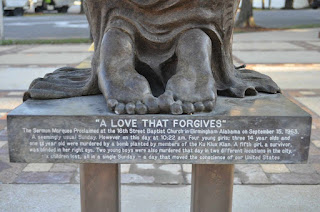 It is telling that the memorial (above) to the four girls killed in the Birmingham church bombing is entitled ‘The Love that Forgives.’

Then I saw “a new heaven and a new earth,” for the first heaven and the first earth had passed away, and there was no longer any sea. I saw the Holy City, the new Jerusalem, coming down out of heaven from God, prepared as a bride beautifully dressed for her husband. And I heard a loud voice from the throne saying, “Look! God’s dwelling place is now among the people, and he will dwell with them. They will be his people, and God himself will be with them and be their God. ‘He will wipe every tear from their eyes. There will be no more death’ or mourning or crying or pain, for the old order of things has passed away.”

This eschatological vision sustained the Civil Rights movement.  In Washington DC Martin Luther King famously declared ‘I have a dream that one day every valley shall be exalted, and every hill and mountain shall be made low, the rough places will be made plain, and the crooked places will be made straight; "and the glory of the Lord shall be revealed and all flesh shall see it together.’

The vision of Revelation is of ‘ a great multitude that no one could count, from every nation, tribe, people and language, standing before the throne and before the Lamb’  King and the others knew that this vision was of how things will be and also how they should be.

It guided their work as they sought, and prayed for the day when ‘justice (would) roll down like waters. And righteousness like an ever-flowing stream.’