To the Southwark Council offices in Tooley Street for the meeting of the Bermondsey and Rotherhithe Community Council, which brings together councillors, council officers, local residents, members of various agencies such as the police, and representatives of various community groups, including the churches.

The theme of today's meeting  was employment opportunities through business and enterprise, but there was also other business, including a ward by ward report by the Police, and various planning matters to be dealt with by the councillors.

Whilst all this was going on, one of our Riverside
Councillors (who was present at the meeting), was appearing on national TV as part of tonight's Party Political Broadcast on behalf of the Liberal Democrats. You can see Anood and catch a glimpse of the Blue on the BBC iPlayer here

In addition to all her other excellent work for the local area Anood is a member of the Friends of St James's Churchyard which met yesterday.

The Friends draws together representatives from the church, Council and the local community, all determined to make the best possible use of the precious open space that the churchyard represents in a community where 85 per cent of the population live in flats and have no garden or open space of their own.

Southwark Council are doing a great job in managing the churchyard with a number of improvements having already taken place (eg the wild flower meadow; the new border on the north east side) and others, such as the repair of the memorials and the introduction of lighting on the north side of the church, in the pipeline.

At the same time the Friends group are seriously investigating the possibility of a new 'Joy Slide' for the 21st century to replace the fondly remembered and much lamented slide that delighted generations of Bermondsey children.

And finally while we are thinking about the Churchyard - watch out for an open air service, disco, party and barbeque in the Churchyard in celebration of Her Majesty's 90th birthday on Sunday June 12th.
Posted by Gary Jenkins at 21:04 No comments: 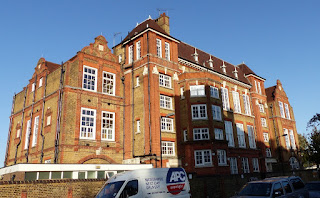 It was the Governors morning at St James's School today, the day each term when governors tour the school and sit in on as many classes as they can, before meeting together for a feedback session with the head.

We started off at the Alexis Street site (above) with the older children who were all doing Maths, using the new Singapore Maths that the school has recently gone over to using. Behaviour was excellent, there was some really good teaching going on, and an amazing amount of Maths being learnt, particularly long division which the children were admirably proficient in.

After break it was time to see what the younger children were up to at Old Jamaica Rd. In the case of the nursery the answer to this was: mud pies. Further up the school it was literacy hour and there was some great work going on here based on the theme of dinosaurs, using lots of different words to describe an imaginary naughty dinosaur who had visited the school.

Another class were putting sentences together with words ending in cious. It was impressive seeing our infants happilly fielding such words as atrocious, ferocious, delicious, and gracious.

All in all a really good morning, that left us once again with a deep sense of thanksgiving for our deeply committed and very able teaching staff. It was really quite inspiring.
Posted by Gary Jenkins at 20:32 1 comment:

Do you want liquor with that? 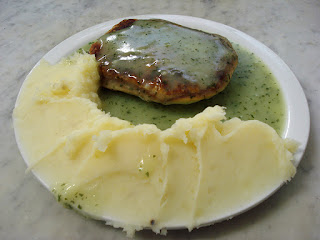 Three years ago when the interviews were held for the post of vicar of St James and St Anne's, Bermondsey, the candidates were served a local delicacy - proper Pie and Mash (liquor included).

But its not just vicars who need the kind of uniquely Cockney sustenance that only Pie and Mash can offer, curates (aka trainee vicars) need it too, so when three of us spent a day of prayer and reflection at our neighbouring parish church of St Mary Magdalen, Bermondsey, and when it got to lunchtime, our next step was obvious.

With Manze's just round the corner, it was time for some Pie and Mash. And for our curate, Jos, his very first experience of a famous Bermondsey institution.

(For those readers who are wondering if we also downed a few succulent jellied eels - we didn't. And for those who are wondering about the liquor - this was  the middle of a prayer day after all -  it's the green Parsley sauce shown in the photo).

Posted by Gary Jenkins at 20:42 No comments: 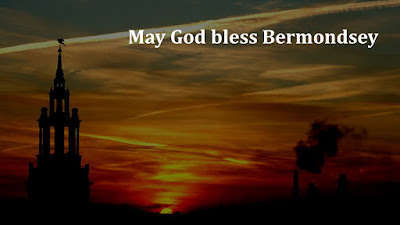 To City Hope Church in Drummond Rd for the C4T Prayer Meeting.

C4T, Christians for Transformation in Bermondsey and Rotherhithe, links together churches and fellowships across the area as we seek to share the Good News of God's love and work for the transformation of lives and communities.

City Hope, Monnow Rd Baptist, Haddon Hall Baptist, St Mary's, St James, and St Anne's were among the churches present at tonight's excellent meeting - it was good to be together to praise, to pray, to give thanks, and to encourage one another.

Thanks to the team at City Hope for putting it on.

The next combined churches prayer meeting will be at St James on 6th July.

Posted by Gary Jenkins at 22:19 No comments:

Ring out those bells 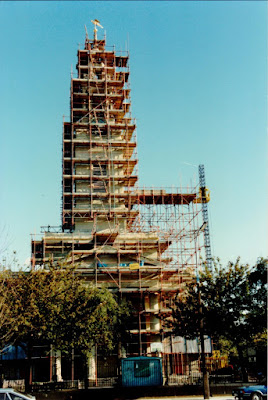 The Docklands Ringers report that it is 25 years since the bell tower of St James was in scaffolding, the old bells were removed (eventually to find a new home in St James Cathedral in Toronto), and a new ring of bells, cast by the Whitechapel Bellfoundry, were installed.

The new bells were rung for the first time in February 1991.

Since then, thanks to the Docklands Ringers, they have rung out every Sunday, making a joyful noise to the Lord, calling the people to worship

Here are the old bells leaving: 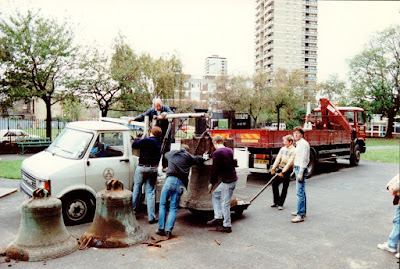 And here are the new bells: 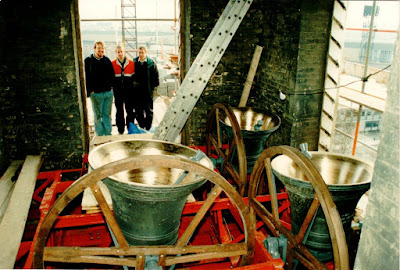 Posted by Gary Jenkins at 17:29 No comments:

A boy was born

Three years for us in Bermondsey and the time has whizzed by.

One of the best things about being a BermondseyVicar is our wonderful church school, St James, over 500 lovely children and an amazingly dedicated staff team.

It was good to welcome them all back today at our beginning of term/eve of Epiphany service in church this morning.

On Christmas Eve at the Co-Op across the road from the Vicarage there were the first sightings of Creme Eggs, but in the church calendar we're still in Christmas (just). We like to savour these things: the wonderful news of salvation, the light shining in the darkness, the day that God became a baby.

You don't want to rush those truths. You want to enjoy them.

So with the church still decorated for Christmas, and Epiphany very much in view, we sang 'We three kings', 'Come and join the celebration' and 'It was on a starry night... that a boy was born, king of all the world.'

Our prayer for our St James's children in 2016 is that they will know this Jesus as their friend, their Lord, and their saviour every day of their lives 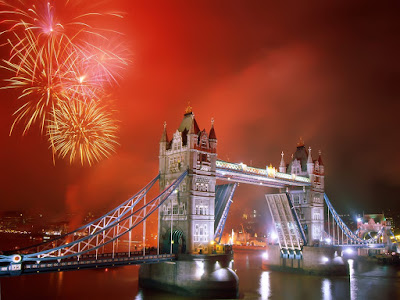 And here's the view last night from the roof garden at the top of the Salmon Youth Centre: 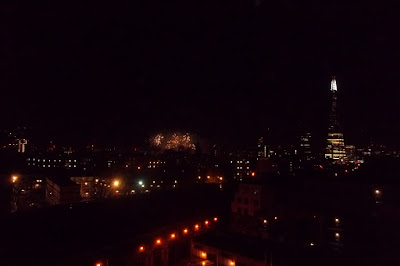