Bearing fruit and growing at the Barbican 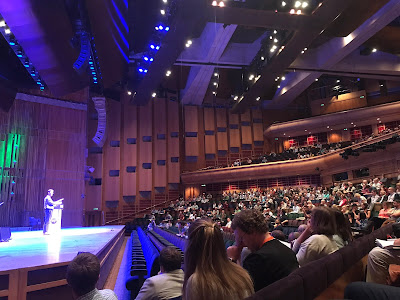 For the last three days Jos and I have been attending the Evangelical Ministry Assembly (left) in the Barbican Centre, along with 900 other local church ministers.

It's an annual event and I go every year. It is specifically designed to encourage local church pastors in their ministry of God's word, the Bible.

This year's theme was 'Bearing Fruit and Growing: Preaching and the Mission of God.' 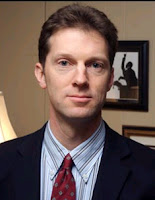 It is always good to meet up with old friends, and hear gifted speakers from across the world.

Particular highlights this year were the talks on mission by Kevin DeYoung theologian, author, and pastor from North Carolina, USA, and the closing address by Vaughan Roberts (right), Rector of St Ebbe's Church, Oxford.

We learnt some new songs and sang some real golden oldies, including a particular favourite of mine: Jesus the Name High Over All, - this created a great sound with 900 pastors singing at the tops of their voices, in the excellent acoustics of the City of London's Barbican Concert Hall.

It was an encouraging few days, and left you raring to get on with the work of proclaiming God's ancient and ever-new Word - which was exactly what it was designed to do.
Posted by Gary Jenkins at 21:29 No comments: 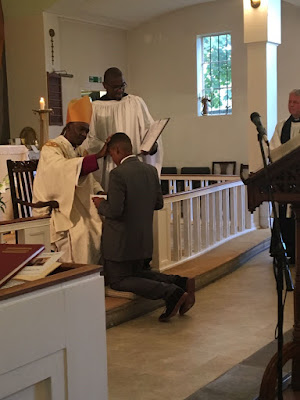 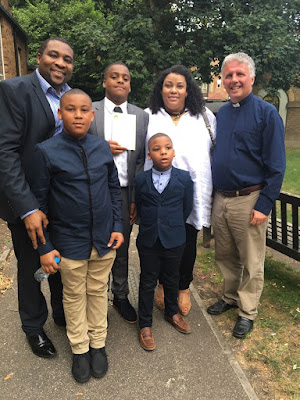 Posted by Gary Jenkins at 21:17 No comments:

Our day began with an open air service for St James and St Anne's in St James's Churchyard.

Earlier in the week it would have been too hot to be outside, but today the weather was just right for praising the Lord in the open air. A big thank you for our friends from the Rhema Church - who share the building with us - for organising the PA and sound. 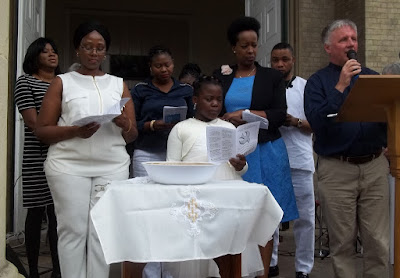 It was good to have Stan Catton back as our guest preacher, as two members of our congregation, Beatrice and Maria (right) were baptised.

Later at Holy Trinity, Rotherhithe, it was the Bermondsey deanery confirmation service with Bishop Karowei, where Beatrice was joined by four other members of our churches to be confirmed, David, Olufolakemi, Grace, and Antoine: 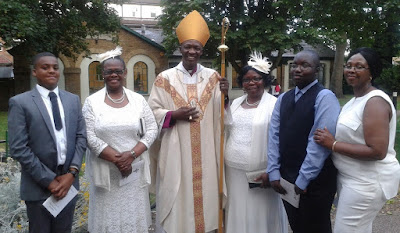 We sung some great hymns including 'Come down O love divine' and 'And Can it Be', led by the Holy Trinity choir, and I was struck once again by that wonderful prayer for the candidates that comes just after the confirmation itself: ' Defend, O Lord, these your servants with your heavenly grace, that they may continue yours for ever, and daily increase in your Holy Spirit more and more until they come to your everlasting kingdom.'

May that prayer come true in the lives of our five newly confirmed Christians.
Posted by Gary Jenkins at 21:50 No comments: 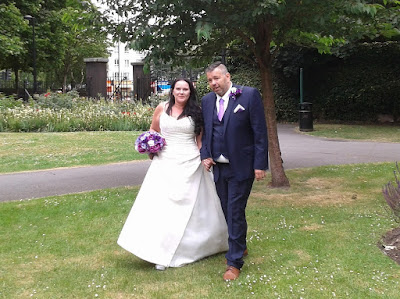 The recent flurry of weddings continued at St James today with the marriage of Jason and Michelle (left).

Congratulations to you both and may God bless you.

Meanwhile, we are gearing up for our Open Air Service in the churchyard at 10.30am tomorrow with two people being baptised and Stan Catton coming back to preach.

In the evening we have the deanery confirmation service at 6pm at Holy Trinity, Rotherhithe, for which we have five candidates. It will be quite a day.
Posted by Gary Jenkins at 21:16 No comments: 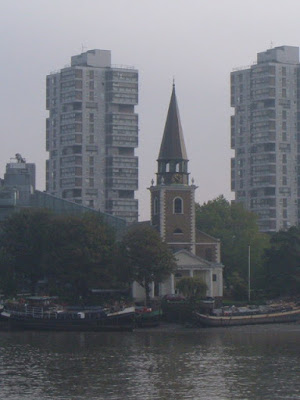 This is Selworthy House in Battersea where my family lived on the nineteenth floor for three years in the 1960s.

As a former tenant of a council tower block my thoughts and prayers have particularly been with the residents of Grenfell Tower over the past few days.

My younger brother and I rather enjoyed living in Selworthy. The views were terrific and each day we raced each other the 38 flights of stairs to the ground floor on our way to school, timing ourselves by the factory clock opposite. (There was a lift - but we were young and liked the run down the stairs).

Years later, for a theological college project, I interviewed my Dad about our time at Selworthy.

He said two things that have stuck in my mind.

First he said, 'it was like we were just a number, not a family.' Secondly he said, 'I always worried about how we would get out if there was a fire.'

To be honest  I have come to loathe tower blocks with a passion. Even if you get the fire safety and maintenance right (and we have seen that even that is a big if), high rise living is disastrous for family life. It doesn't work for kids and it doesn't work for parents - who like to supervise their children when they play out.

Years later I was a vicar on a council estate where they got it right: houses in streets, with gardens. The tenants loved it and community life flourished.

That estate, St Helier, was built in the 1930s. Selworthy was built in the 1960s; it was not a step forward. The small terraced houses that were demolished to make way for Selworthy could have been replaced with something similar, or just repaired. If the local people had been asked, that is what they would have said, but no one asked them.

By all means let's make our tower blocks safer, but let's also accept that sometime in the 1960s we took a wrong turning. The St Helier estate of the 1930s shows a better way forward: 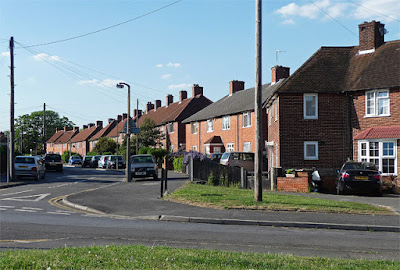 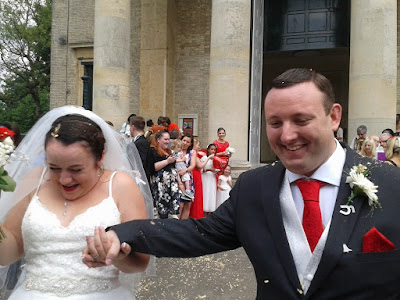 The bells were ringing over Bermondsey this afternoon (hear them here) for the wedding of Emma, from the Salmon Youth Centre, and Barry, a member of St George's, Morden - and there were people from both Salmon and St George's present for today's excellent service.

Every blessing to the happy couple

I conducted the wedding itself, Sam Adofo, Director of Salmon led the prayers, and Revd Les Wells, vicar of St George's preached.

When I was vicar of St Peter's, St Helier in the next door parish to St George's, Les was in the congregation and so it was very special to be able to perform a double act at St James this afternoon. 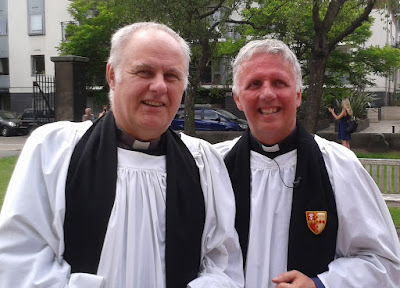 Posted by Gary Jenkins at 16:40 No comments:

Whatever you do: vote 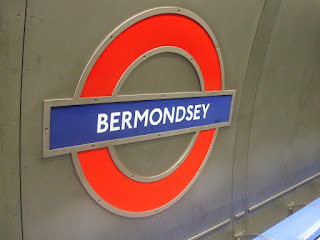 My sabbatical is over and normal service will be resumed on this blog. It's been a great time being away, with lots of opportunity for reading, reflection, visiting friends and travels, but now its good to be back, picking up the threads of parish life here in Bermondsey.

If you haven't had a look at it yet, check out my sabbatical blog to find out more about our travels in the US and Germany.

In the very midst of the General Election campaign we have had two terrible terrorist attacks - in Manchester, and just down the road from us here, at London Bridge and Borough Market, with our own Cathedral closed for business, so to speak, inside the security barrier.

These are troubling times and our hearts go out to everyone who is injured, bereaved or traumatised, but they make Thursday, Polling Day, even more significant.

We have something as of right in this country, which millions across the world can only dream of. We get to choose the Government. We have that most precious thing: a vote. 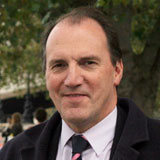 I like what Sir Simon Hughes has said is his letter to the people of the constituency: 'I respect all of my opponents in this election. They are good and decent people. They are my competitors - never my enemies. I am standing in this election to serve our community as I have done for my entire life.


The one thing I ask of you on Thursday is to vote. It matters less who you vote for than the fact that you do. These murderous terrorists wanted to hurt us and change us. They will never succeed - and by voting we stand with our institutions and our way of life.'

I agree with Simon.

Posted by Gary Jenkins at 21:48 No comments: