Posted by Gary Jenkins at 16:45 No comments:

Two and a half months after we first issued this message, the suffering of Ukraine goes on, so we return to it again and to its call for us to pray for that troubled nation that the warfare that is currently afflicting it may come to an end:

Posted by Gary Jenkins at 15:51 No comments: 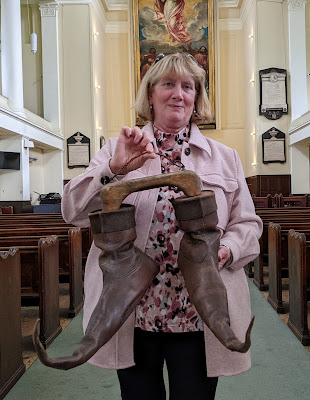 ST CRISPIN'S BOOTS RETURN TO BERMONDSEY:
When St Crispin's Church in Southwark Park Road closed for worship, St Crispin's boots were brought to the Diocesan offices and placed on the top of a cupboard where they have stayed ever since, until last week when they came back to Bermondsey and will now be displayed in St James Church (whose parish now includes the St Crispin's area)
St Crispin is the patron saint of cobblers, tanners, and leatherworkers, and with Bermondsey such a centre historically of the leatherworking industry, the dedication of the Southwark Road Church was quite apt . 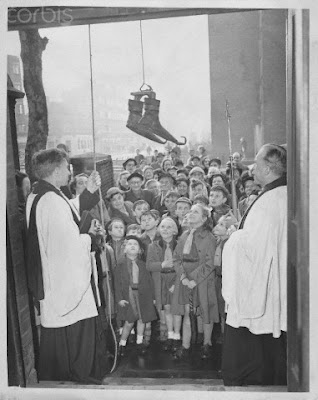 The pictures show the boots, suspended from the ceiling, being admired by local children during the St Crispin's Day celebrations at St Crispin's in October 1956, and in 2022 with St James churchwarden, Pat O'Connor, in St James.
Welcome back to St Crispin's boots.
Posted by Gary Jenkins at 15:43 No comments:

The videos will return next week, but here is the text of yesterday's sermon in our new two-part series of giving to God's Work:

I don’t suppose a professional fundraiser would have bothered with the churches in Macedonia.

For one thing everyone knew they were as poor as poor could be. What could they possibly contribute to the appeal to help the struggling church in Jerusalem?

But here’s the remarkable thing: God had been doing something amazing in the churches of Macedonia so that in the very midst of their extreme poverty and severe trials, there was something else going on in their church. It is what Paul calls ‘overflowing joy’

The very last people on earth who had anything to sing about were in fact overflowing with joy, not with self-pity, but joy.

So when he is writing his letter to the Christians in Corinth (our 2 Corinthians in the Bible) Paul says in effect: consider the Macedonians:

VERSE 1: Our friends, we want you to know what God's grace has accomplished in the churches in Macedonia. 2 They have been severely tested by the troubles they went through; but their joy was so great that they were extremely generous in their giving, even though they are very poor

And this was the astonishing outcome

Verse3  I can assure you that they gave as much as they could, and even more than they could. Of their own free will 4 they begged us and pleaded for the privilege of having a part in helping God's people in Judea.

No one thought there was any point in asking the Macedonians to help out with the collection for Jerusalem but here’s the big surprise: they ‘pleaded’ to be involved

Instead of Paul going begging to them, they came to Paul begging to be allowed to give

So says Paul to the Christians in Corinth – and to us – if you’re thinking about giving; if you’re reviewing your personal giving budget, think about the Macedonians, and while you’re doing it you could consider another remarkable example of giving:

Consider the example of the Lord Jesus

VERSE 9 You know the grace of our Lord Jesus Christ; rich as he was, he made himself poor for your sake, in order to make you rich by means of his poverty.

It is pretty well accepted by most people that if you get the chance to live in a better area than the one you live in now you should seize the opportunity with both hands. Its called being ‘upwardly mobile.’

Instead he left the glory of heaven – a really nice district to live in – and he came to earth where people mocked him, spat upon him, nailed him to a cross and killed him

Our downwardly mobile God gave up everything for our sakes

And says Paul, when you’re thinking about giving, consider Jesus, he was rich, he became poor for us in order to make us rich towards God

That’s what the Bible calls grace, the extravagant self-giving love of our great and generous God

That surely brings us to Paul’s final point to the Corinthians and to us:

At this point the Apostle Paul is very practical

12 If you are eager to give, God will accept your gift on the basis of what you have to give, not on what you don't have.

Firstly Paul says its all about willingness. Its where your heart is. Its what you want to do in the light of what God has given for you.

Secondly, he says no one can give what they don’t have. You can only give from what you have. Don’t feel guilty if you can’t give a lot because you haven’t got a lot.

But each of us can give generously from whatever it is that we have.

12 If you are eager to give, God will accept your gift on the basis of what you have to give, not on what you don't have.

Posted by Gary Jenkins at 08:00 No comments:

Nothing can separate us 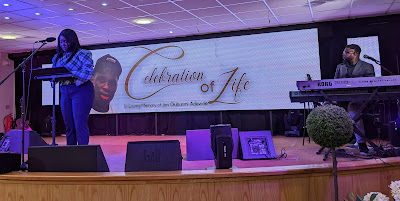 It was very special to be at Bestway International Christian Centre in Camberwell this afternoon, the home church of Folajimi who gave his life a year ago in an attempt to save a woman who had fallen in the Thames, and to be invited to say a few words in greeting and encouragement from Scripture, focussing on Romans 8.39 'nothing in all creation will ever be able to separate us from the love of God that is revealed in Christ Jesus our Lord.'

Posted by Gary Jenkins at 17:42 No comments:

Exactly a year ago today we shared this reflection on the commemorative event that took place in Spa Gardens for Bermondsey youngster, and Salmon Centre member, Folajimi, who gave his life in an attempt to rescue a woman who had fallen into the river. We re-share the video in his memory:

Posted by Gary Jenkins at 00:30 No comments: