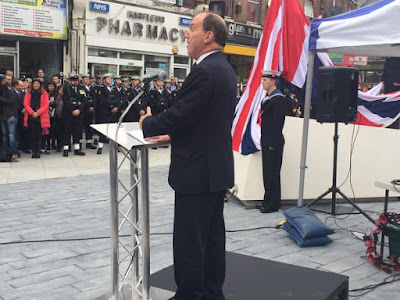 Albert McKenzie, the 19 year old sailor from Bermondsey who was presented with the Victoria Cross by King George V in 1918,  has been honoured with a new memorial (left) unveilled yesterday in Tower Bridge Rd and a 48 gun salute from HMS Belfast. The iron statue stands on a slab of stone from Zebrugge Harbour (scene of his brave exploits), donated by the people of Flanders.

You can read more about his life here and see a video of his hero's reception in Bermondsey after the war here. Sir Simon Hughes one of the long term supporters of the campaign to have McKenzie comememorated in Bermondsey is pictured (above)  here speaking at yesterday's event.

Here from the SE1 website is the moment of unveilling:

The heart of the Gospels 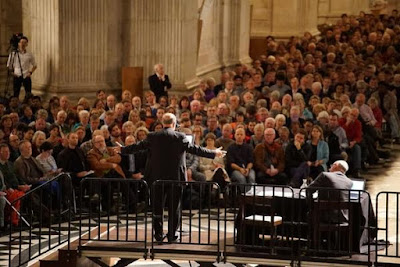 There were long queues outside St Paul's Cathedral tonight as over 1,000 people swarmed in.....to hear a bishop talk about the Bible.

Tom Wright, former Bishop of Durham, and international reknown bible scholar, held the audience spellbound as he unpacked the message at the heart of the Gospels, and then fielded questions tweeted by the congregation (or, in the case of the technologically challenged, scribbled on the back of their programme and waved in the air for a steward to collect.

As well as writing over 50 books, NT Wright has a remarkable ability to communicate complex ideas simply - and make them exciting. 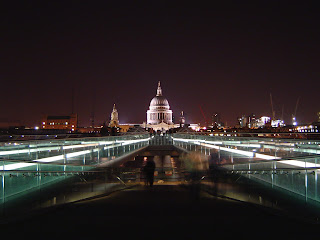 I've read quite a few of his books (not all of them) but its always a joy to hear this man speak with his infectious enthusiasm for the Gospel.

Here are a few tweeted snippets:' Because of Jesus something happened which makes the world a different place;' 'When God wants to change the world he doesn't send in tanks but meek, mourners, merciful;' 'The resurrection & Jesus' healings speaks to the fact that God cares for this world and will make all things right'.

One person tweeted: 'Jesus starts where we are Hurrah! When we cannot grasp it, that's Okay- follow on! Praise the One True and Living God. Amen'
Posted by Gary Jenkins at 21:34 No comments:

Joy in heaven and SE16 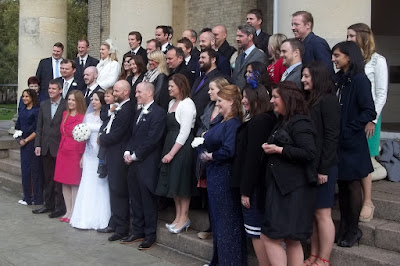 There was joy in heaven, I suggested in today's wedding sermon, as Tim and Sharon made their marriage vows to each other.

Joy in heaven? Because that was the way God planned it from the beginning: a man to leave his father and mother and to be united to his wife and become on flesh (Genesis 2.24).

That unique relationship is wonderfully encapsulated in the marriage vows Tim and Sharon made to each other today: to have and to hold, from this day forward, for better, for worse, for richer, for poorer, in sickness and in health...

God bless you, Sharon and Tim, today and for the rest of your life together.
Posted by Gary Jenkins at 21:33 No comments: 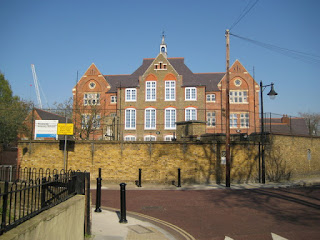 Yesterday we welcomed the second of two classes from Riverside Primary School (left) to St James Church to see what goes on inside a church building.

Earlier one of the teachers had taken photos of different parts of the building, and the children had come primed with a host of questions, ranging from what does the lady in the office do? to why did Jesus die?

They loved climbing up into the organ loft.

They loved the bell ropes.

They also liked the Noah's Ark mural in the creche room, meeting the lady who works in the office, and handling the silver communion flagon.

They were an incredibly well-behaved, lively, and curious bunch - a credit to their school. 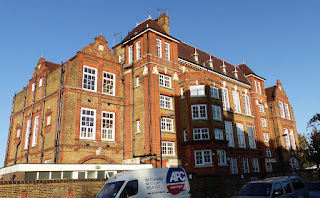 MEANWHILE at St James's School, history week was drawing to a close and I spent the morning with the two year 5 classes at Alexis St.

At the beginning of the week I had set them a task (by video): why was the school building built like it was in 1876?

Now the children were going to show me their presentations about the amazing story of E.R. Robson and Alexis St School (previously mentioned in this blog here) and I had to choose the best one in each class.

They had done some great work and the winning presentations will be shown to the whole school at assembly on Monday.

Some of the children had uncovered a new fact about the school's architect: he was offered a knighthood twice. Both times he declined.

The architect of nearly 300 London schools (including our one) said he had done it for the children.

Posted by Gary Jenkins at 21:30 No comments: 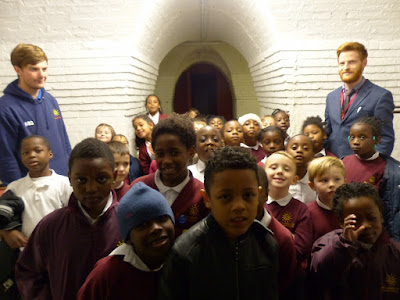 As part of their special history week, five classes of Key Stage 1 children ('the infants', in old money) from St James's School have been visiting the church to find out about its history.

First up, they viewed the Communion Silver from 1829, given to the church when it was built in the days when Bermondsey was a country village on the banks of the Thames, frequented by merchants  from the City of London.

At the end of the visit we descended to the Crypt (above) and learnt how it was used as an air raid shelter in wartime, and how the Vicar used to lead the people sheltering there in the third collect for Evening Prayer, very appropriate in the circumstances.

It goes like this: 'Lighten our darkness, we beseech thee, O Lord, and by thy great mercy defend us from all perils and dangers of this night for the love of thy noly Son, our Saviour, Jesus Christ.'

Earlier we ascended to the third floor, Pauper's Gallery, where less well-off members of the congregation, who couldn't afford the pew rents on the ground floor, were accommodated.

Fortunately, these days all the seats in St James's are free.

Posted by Gary Jenkins at 12:34 No comments: 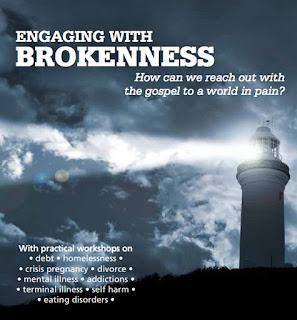 To the annual Evangelists Conference at All Souls, Langham Place, in the shadow of the BBC.

This year's conference, held in London and Manchester, had a special focus on ministering to the tougher areas of our large cities.

In addition to a superb keynote address from the main speaker, there were seminars on  debt, homelessness, addiction, eating disorders, crisis pregnancy and single parent families, followed by a sample sermon from main speaker Steve Casey that he had preached in his own church on a Liverpool Council Estate.

It was an excellent day, brilliantly organised. Here's how the day was described online:


'The good news of the gospel is for everyone—not just those who have their lives “together”. In fact, the gospel meets us, and promises hope to us, in the very hour of our deepest need. We are delighted to welcome Steve Casey (right)  and a large team of specialist seminar speakers to stimulate our thinking about how to reach out with the Gospel to our broken world. Steve’s experience of working on a tough housing estate, and his involvement in Christian Counselling UK will help navigate us through the opportunities, and avoid the pitfalls we see on every side. Join us for what promises to be a challenging and enlightening day.

Steve casey is a full-time pastor at Speke Baptist church in Liverpool where he has worked doing outreach with a huge range of people for the last 20 years. Steve works with Biblical Counselling UK and Living Leadership and brings passionate Biblical insight and a wealth of practical experience to this issue.'
Posted by Gary Jenkins at 22:01 No comments:

Return of the joy slide?


From 1931 a clip from a film about the activities of Bermondsey Borough Council, shown tonight at a meeting of the Friends of St James's Churchyard.

The clip shows the famous 'Joy Slide' which enthralled generations of Bermondsey children.

The big question at tonight's Friends meeting was: can the Joy Slide come back in a new form, perhaps via a national competition to design an innovative children's slide for the 21st century to be sited in our Grade 2* listed churchyard? 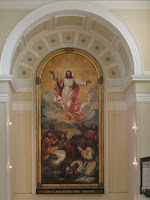 St James was the subject of a national competition once before. That was the one held in the 1840s to
design the picture of the Ascension that adorns the East wall of the church.

It was won (against stiff competition from the leading painters of the day) by a completely unknown artist. Perhaps history might repeat itself with the joy slide.
Posted by Gary Jenkins at 19:46 No comments: 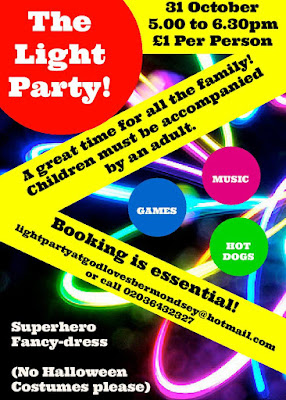 The Light Party is our family-oriented alternative to Halloween on 31st October at 5pm.

Come and celebrate the light with games, music, and hot dogs

Children must be accompanied by an adult and you need to book a place here
Posted by Gary Jenkins at 20:30 No comments: 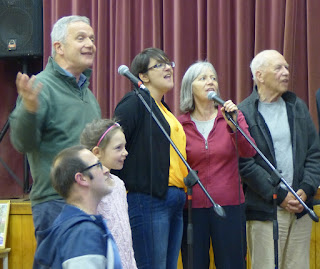 Earlier we had been treated to dancing by Sam, ventriloquism by Bradley, a mother and daughter harvest hymn by Lola and Linda, plus songs by Roger, Sarah, David, Rachel, Tracey, Debbie & many others, plus artwork by Alan (what a talented lot) but a veritable food mountain for our bring-and-share harvest supper, making a wonderful evening of harvest joy for both churches. 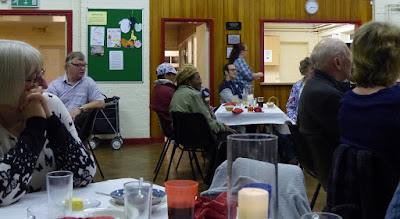 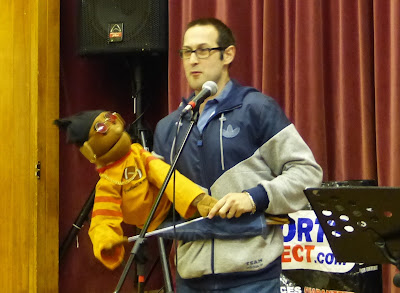 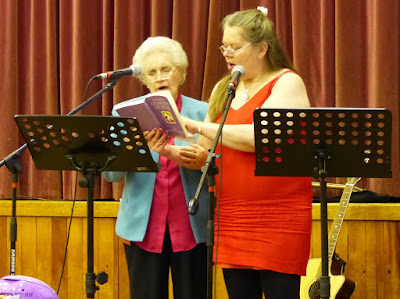 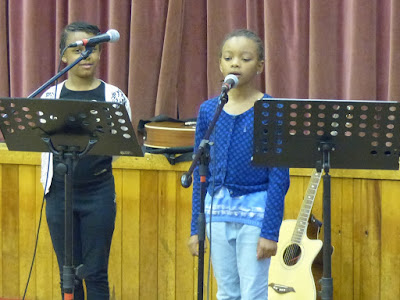 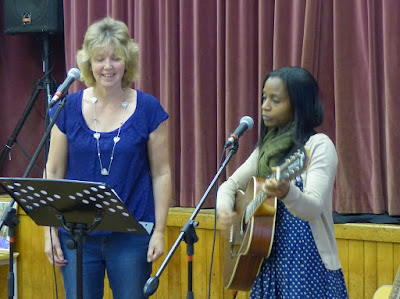 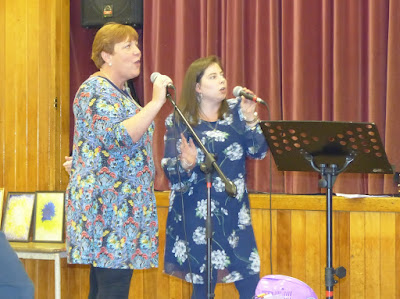 Meanwhile, next door in the church, everything was ready for St Anne's Harvest Festival in the morning: 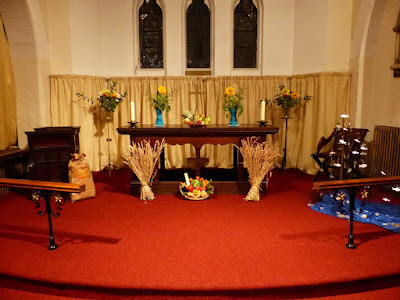 Posted by Gary Jenkins at 22:43 No comments: