With events in the US my thoughts turned to my sabbatical study on 'Slavery, Civil Rights and Black Christians in the southern United States' and what happened at the Martin Luther King Jr Visitor' Center, Atlanta, just after we had heard a re-enactment of MLKJ's 'I have a dream speech' in the Ebenezer Baptist Church, nearby:

In the visitor's center there was an exhibit that consisted of life size models of marchers, marching for racial equality - men, women, boys, and girls, black and white. 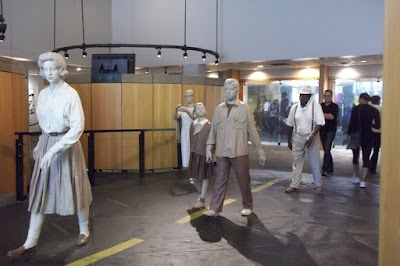 Many visitors posed for photographs of themselves with the marchers.

One family caught my eye. There were two boys, about 14, two younger kids, mum and dad. All black. We had seen them previously in Ebenezer Baptist Church.

The mum wanted one of the boys to pose with one of the model marchers, a boy of about the same age as himself.

He stood there in a slightly embarrassed but I'll do this to please mum manner and smiled for the photo. But she wasn't quite happy with the shot. There was something else she wanted. She wanted her son to hold the hand of the model white boy, which he duly and shyly did, just for a moment, while mum took her picture.

Immediately I caught on to what she was doing. Earlier in the re-enactment MLKJ's 'I have a dream speech' we heard these words: 'one day right there in Alabama little black boys and black girls will be able to join hands with little white boys and white girls as sisters and brothers'

That's why she wanted her black boy to hold the hand of the white boy.

She had a dream and she wanted her son to be part of it.

Please God, may he even experience the reality of it in his life.
Posted by Gary Jenkins at 15:56