'I will build my church'

With our 50th anniversary service for the church's re-opening, and the infusion of new life coming from Cambridge University Mission, we have been thinking about the history of St James's Church and the area it serves. 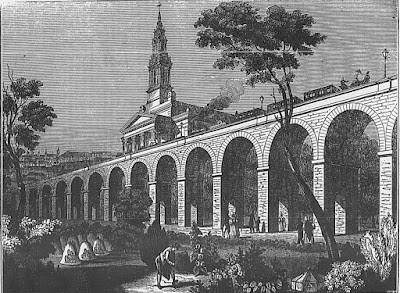 I've been given a list of key dates in the Church's life and I have selected a few of these milestones for blog readers.

Like many churches, St James has had its ups and downs, its highs and its lows, but the Church has continued to flourish, and proclaim the unchanging, life-changing message of the Gospel, knowing that the church is the people, not the building, that it belongs to Jesus and he said 'I will build my church, and the gates of hell will not prevail against it.'

Posted by Gary Jenkins at 10:33 No comments:

When she's not keeping us all organised and welcoming visitors to the church, our wonderful Administrator, Ruth, is an accomplished singer and worship leader...

Here is her version of 'Hallelujah' delivered to the Celebratory Concert at the Salmon Youth Centre on Saturday night as part of our 50th anniversary celebrations.

When the church got rebooted 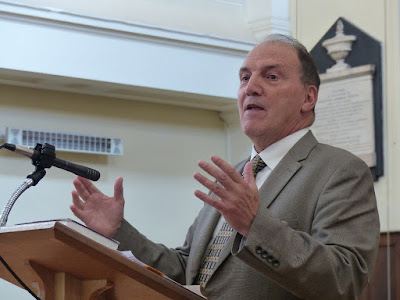 It's not every day you manage to get a knight of the realm as your guest preacher, but this was a special occasion, and the preacher in question, Sir Simon Hughes, had been a member of the congregation for the best part of 40 years.

To use computer terminology, as one Twitter user and Salmon Trustee has done, it was all about the day the church was re-booted.

50 years on Sir Simon, preaching from Colossians 1.3-14, made reference to the express courier company DHL, and said the church was a FHL organisation, a Faith Hope and Love organisation, founded by Jesus, spread by the Apostles, existing and growing in every place around the world, committed to spreading God's message of Faith, Hope and Love in Bermondsey and beyond.  Jesus had come to save us and to show us the path of salvation. 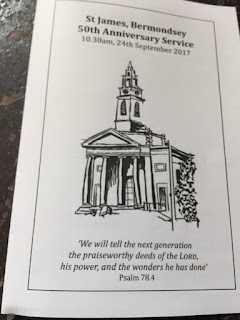 The service also included readings by Sam Adofo, Director of Salmon, and Christopher Whinney, brother of the late Michael Whinney, and prayers led by members of the congregation.

A church lunch and barbeque followed with much sharing of memories and many happy reunions. The Salmon Annual General Meeting followed. With the thanksgiving service on Saturday night, it had been a great weekend of celebrating and thanking God for the partnership in the Gospel that has existed betwen St James's Church and CUM/Salmon for half a century,

Posted by Gary Jenkins at 16:44 No comments: 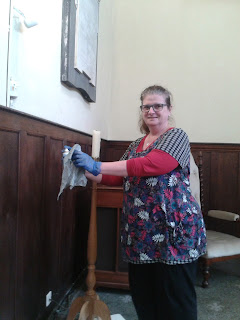 Getting ready for tomorrow's 50th anniversary in St James, we had a great working party cleaning, polishing, dusting and scrubbing so that the church looks pristine.

Thank you to every one who came to day and to those who did their bit in the week.

In the meantime here is tomorrow's introductory Powerpoint of photos from 50 years ago and today.

Posted by Gary Jenkins at 13:39 No comments:

A kind of resurrection in Bermondsey 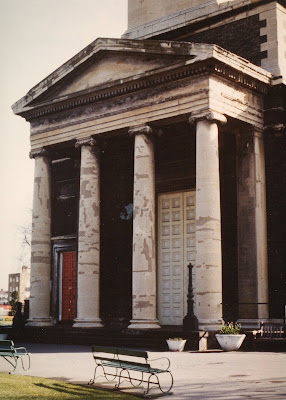 For a number of years in the 1960s St James Church was closed. Demolition was even considered and then came a kind of resurrection.

It was a kind of resurrection for a church that nearly died.

Long term congregation member, the Rt Hon Simon Hughes, will be our guest preacher at our special 10.30am, many former members of the congregation are coming back to join us, and a celebratory church lunch will follow, and EVERYONE is invite to come and give thanks.

Posted by Gary Jenkins at 11:34 No comments:

With God in the ordinary 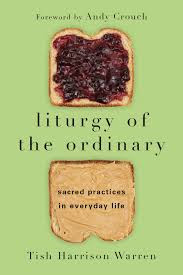 Visiting Pittsburgh on sabbatical I was fortunate enough to be given a signed copy of this book by its author, Trish Harrison Warren, at a meeting in which she was speaking.

I've just read the book and I highly recommend it. The blurb on the back says 'God is near. In overlooked moments and routines, we can become aware of God's presence in surprising ways.'

Each activity is related to a spiritual practise, to biblical teaching and to Sunday worship. There is a great deal of spiritual wisdom in this book and I particularly liked her appreciation of the Anglican liturgy, having come to it from a non-liturgical church. Excellent.

Posted by Gary Jenkins at 17:49 No comments: 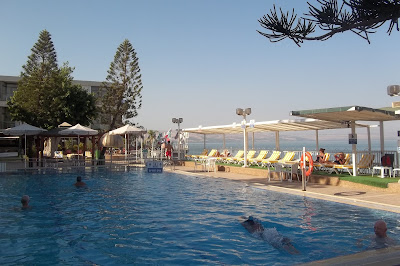 We left our beautiful hotel on the banks of the Sea of Galilee yesterday and headed off towards Tel Aviv airport and our flight home, but not before we had called in at  Caesarea, the scene of the conversion of Cornelius, and the beginning of the gospel mission to the Gentiles, all as related in Acts 10 (which we read together).

This was a  crucial moment in the life of the church, with revolutionary consequences for all of us, who now, by God's grace, can be incorporated into the company of his people..

And so our time in the Holy Land has come to an end. Each night we met to sing God's praise and hear his word, sharing in Holy Communion together on our last night and first thing on the Sunday morning. At various points on the way we stopped to read the Scriptures, to pray, sometimes to sing.


It was good to be reminded that the Bible is set in a very different world from ours. The heat. The desert. The hills of Jerusalem. The boundaries, the checkpoints, the  military occupation, the disputes and wars that have ravaged this land from Jesus's time until now. The stark beauty of the desert. The green of Galilee. The dates, mangoes, and bananas. The Beduoin, their ramshackle settlements, their goats. The Muslims, the Jews, the Christians. Masada. Jerusalem. Jericho. Bethlehem. Nazareth.


It's a beautiful and messy and slighty chaotic sort of place, just like it's always been, and just like most of the rest of the world for which Christ died, but its the place where the Word became Flesh and dwelt amongst us, and our little group from Redhill, Bermondsey, and many other places besides have been privileged to walk where Jesus walked these past eight days. Thank you, Lord.


Finally, from the church of St Anne in Jerusalem (thanks Funmi for these videos)..... 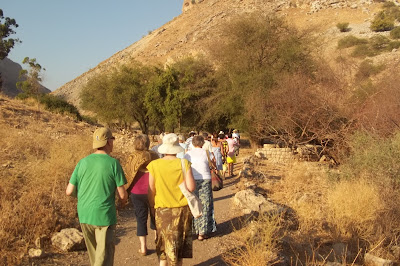 Our last full day in the Holy Land was spent around the shores of the Sea of Galilee. We started off with a walk along the 'Jesus trail', a country path of the kind Jesus would  have travelled along, before heading for the lake-side church at Magdala, full of beautiful portrayals of Gospel scenes, and an extraordinary boat shaped pulpit-cum-altar with views of the Sea of Galilee as a backdrop. 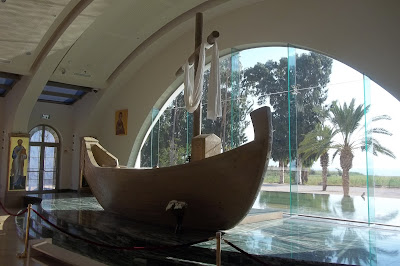 Next up was a boat trip across the Sea of Galilee. The custom of the boat owners is to hoist the flag of the native country of the visitors and to play their national anthem. So with the Union Jack flying over the Sea of Galilee we rose  to sing God Save the Queen. The patriotic Bermondsey crowd  sung the loudest.  Of course.

The views across the lake were stunning. In the middle of the lake they switched off the engine and in the beautiful quiet and peace we heard from the Bible of the occasion when Jesus calmed the storm on that very water, commanding the wind and waves to be still, leaving a bewildered and terrified band of disciples crying 'who is this man? Even the wind and waves obey him.' 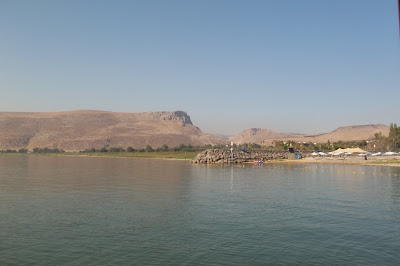 Then things got lively as the crew taught us some Israeli dances.

I must remember next time I do a spot of Israeli dancing not to do it when the temperature is 35C, but it was great fun.

We then had a kind of impromptu praise party with karaoke versions of 'this little light of mine', 'How great thou art' and 'My Jesus my saviour' being belted out across the lake by an enthusiastic band of pilgrims.  It was a truly wonderful hour. 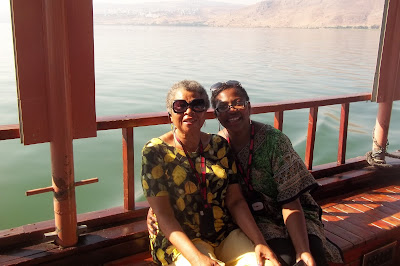 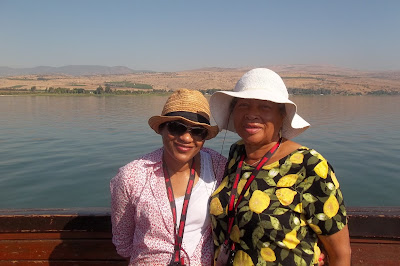 Next up we saw the Jesus boat, a wonderfully preserved first century boat, discovered in the mud of the lake. 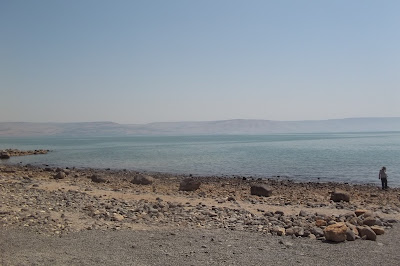 Just before lunch we stopped by the lake side to recall the occasion when the risen Lord Jesus prepared breakfast for the disciples on the lakeshore as they returned from a night's fishing. We read from the Scriptures, we sang, we drank in the silence and we marveled. It was an Emmaus moment - one of those occasions when you say 'didn't our hearts burn within us?'

After lunch by the lakeshore we went to Capernaum to see the archaeological remains and to view the beautiful modern church that has been built there to round off a memorable day in Galilee.

And now for some dancing...

Posted by Gary Jenkins at 14:57 No comments:

Scenes from a Nazareth day 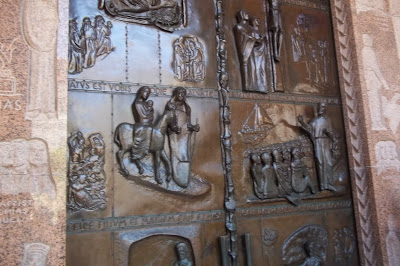 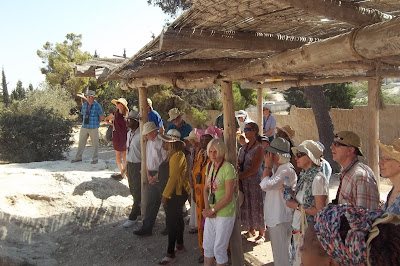 Jerusalem to Jericho & on to Galilee 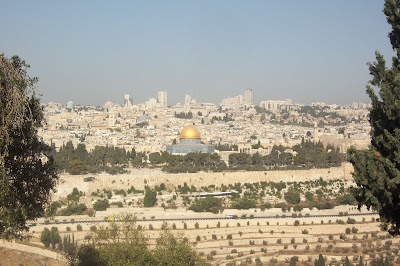 From Jerusalem we headed north today to Galilee but not before we headed to the Mount of Olives for a spectacular view of the city and the opportunity for a group photo: 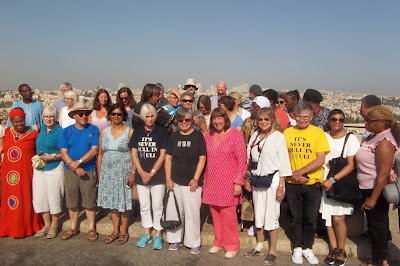 Also taking in the view was: 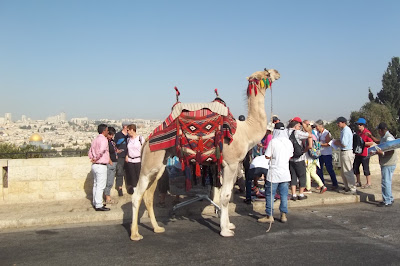 Soon we were heading out of the city and into the desert and on the road going down from Jerusalem to Jericho (the lowest city in the world at 1000ft below see level and the oldest city in the world). On the way we stopped at the Good Samaritan Inn - a kind of museum commemorating Jesus's most famous parable. 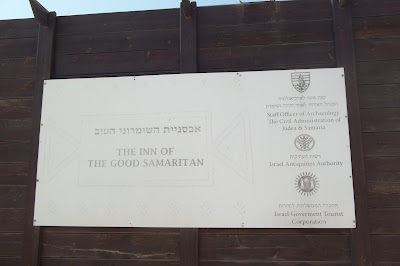 This is an official Israeli Government site and it was fascinating to read their leaflet about the parable of the Good Samaritan which argued that Jesus could not have possibly meant the Good Samaritan. Clearly there had been a mix up in the translation process and it should have really been the Good Israelite, they argued. (They were completely serious about this).

It's good to think that 2,000 years on Jesus's parable still has the power to shock and upset religious and racial sensibilities.

Anyway our group listened to the old, shocking version, straight from the Bible and recalled the East End preacher who having finished his sermon on the Good Samaritan, looked out at his congregation and said to them; 'so if you see a bloke lying in the gutter: pick 'im up' 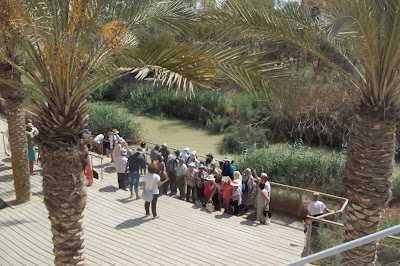 Next up was a visit to the (surprisingly narrow) River Jordan where John the Baptist baptised and where Jesus was baptised. We recalled our own baptisms and all that baptism stands for as God's sign and promise to us. 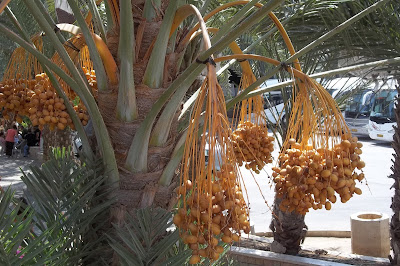 Then we drove further north past trees laden with dates (above), and plantations of bananas in a scene that was increasingly green thanks to the ingenuity of the Israeli system of irrigation, before reaching our hotel on the shores of Lake Galilee where we will spend the rest of our time in Israel