Posted by Gary Jenkins at 14:09 No comments:

When part of your family lives half way across the world, bereavement can strike you particularly hard. Sometimes it is possible to travel home to be with the family, to take part in the funeral, to share fellowship, grief, and thanksgiving together, but sometimes it is simply not possible and that is hard.

Of course, modern technology means you can watch events live on video, and when Abi from St James lost her mother, she was able to do just that, but even that is not quite the same as being there. What she really wanted was a service of song and thanksgiving in her church with her community of friends here on the day of the burial and that was why we met in St James yesterday evening for a service of prayer and thanksgiving.

We prayed, we sang a selection of songs chosen by Abie (In Christ Alone, There is a Redeemer, Only by grace, Amazing Grace, Shine Jesus Shine), and I spoke from John 14 about the Father's house and Jesus being the only way there.

Afterwards we had a sumptuous near-to-midnight feast, overflowing with food in typical Nigerian generosity. It was a good evening and a good way to remember a beloved mother. 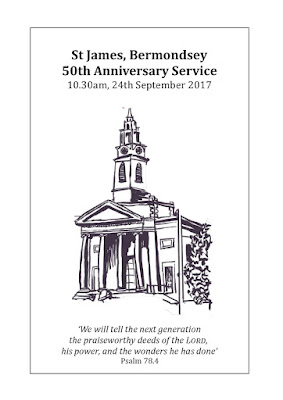 
To begin with the congregation met in the south aisle of the church, but in due course the whole building was restored, and congregation life started to flourish, with a fresh injection of energy and vigour from the CUM-ers.

That all happened 50 years ago this September and we are marking this important milestone in the life of St James with a 50th Anniversary Service of Celebration, Thanksgiving and Rededication on Sunday 25th September, at which long term congregation member and Bermondsey MP for 32 years, Sir Simon Hughes, will be our guest preacher.

We hope many former members of the congregation and church staff, and many current members of the local community will be able to join us for this special day.

Following a celebratory lunch - in the churchyard, weather permitting - St James will be hosting the
AGM of the Salmon Youth Centre, as a mark of the long and continuing friendship and partnership in the Gospel between CUM/Salmon and St James.
Posted by Gary Jenkins at 11:39 No comments:

Earlier in the year I was fortunate to have a sabbatical looking at  Slavery, Civil Rights, and Black Christians in the southern United States.

You can download my report here
Posted by Gary Jenkins at 16:54 No comments:

The splendour of the king 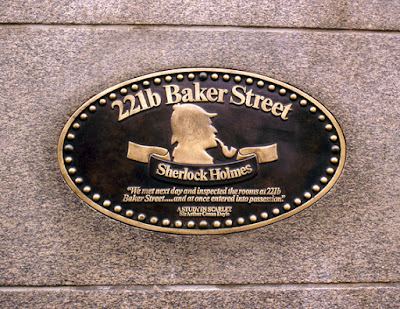 The stories of Sherlock Holmes, which our English teacher at school thought were just the right thing to capture the attention of restless adoslescent boys, are made-up stories.


Rather different, on this the Feast of Transfiguration, was the passage from Luke 9 which we had read in church this morning, being Luke's account of the day when he was 'transfigured' and the disciples saw Jesus 'in glorious splendour.'

In the first reading this morning, from 2 Peter 1, the Apostle gives us the background to that remarkable event.

'We have not depended on made-up stories' he says, rather 'with our own eyes we saw his greatness.'

He goes on: 'We were there when he was given honour and glory by God the Father, when the voice came to him from the Supreme Glory, saying, "This is my own dear Son, with whom I am pleased.'

He concludes: 'We ourselves heard this voice coming from heaven, when we were with him on the holy moutain.'

In the New Testament we have not cleverly made-up stories, but eye witness accounts.

Posted by Gary Jenkins at 22:09 No comments:

Saving the church, blessing the people

He's a bishop with backbone and he's got a passionate concern that the Church does not give up taking the Gospel to the poorest people in the country. 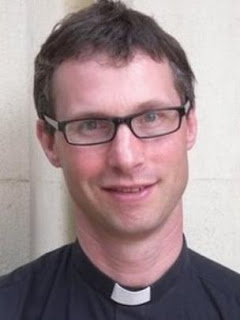 In a widely shared talk, first given at New Wine this summer, Philip North (left), the Bishop of Burnley, asks why the church appears to be turning away from the poor, and pouring resources in ministry to the better-off part of society:


“…in the poorest parts of the country, we are withdrawing the preachers. The harvest is rich, but the labourers have been re-deployed to wealthier areas. We are seeing the slow and steady withdrawal of church life from those communities where the poorest people in our nation live"

“…Nationally we spend £8 per head of population on ministry. In some rural areas that figure rises to £24 per head. On the estates we spend just £5 per head, by far the lowest. The poorer you are, the less the church values you"

“…If you go to a suburban church you will usually find a comfortable and well maintained building with carpets, heating, clean toilets and good music. Estates churches rarely have the money to maintain themselves properly. If you’re poor all you’re worth is a cold and half derelict building"

I think the Bishop is spot on in his diagnosis of the situation and I love his answer to the problem - though this will take a miracle to achieve, and an Act of Repentance by the institutional church which in all kinds of ways has done the very opposite of this in the last fifteeen years or so (but we do believe in miracles so that's OK):

“…We need to raise up leaders in, for and from the urban church. The best person to speak the Gospel into an urban estate is someone who has grown up there, so we need to be courageous and take risks in raising up a local leadership. Catapulting in 200 white, well-educated, beautiful people from the nice bit of town will dispossess and disempower local residents. The impact will be to take their church away from them such that the church will become just another service provided on their behalf by patronising outsiders. In the Church of England our current structures for selecting and training licensed lay or ordained leaders are woefully unfit for purpose and deliver only white, graduate class leaders. The time for tolerating this systemic failure is now over. We must take risks in raising up local leadership, leadership that cannot and will not speak the jargon-laden drivel of the contemporary church but will instead have the Gospel energy to transform it"

O Lord, have mercy upon us.

PS The whole talk is worth reading. You can view it here
Posted by Gary Jenkins at 16:52 No comments: