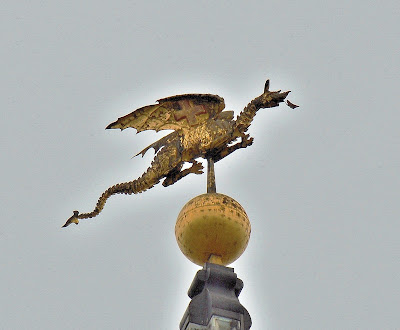 If this dragon looks familiar there may be a good reason for it.

It is not the Bermondsey dragon (see St James's one below), but the dragon weathervane of St Mary-le-Bow in the City of London.

In the nineteenth century architect James Savage was engaged to do restoration work on the church. As Savage was the architect of St James's Church, perhaps it was from his work at St Mary's that he got the idea of a dragon flying high over Bermondsey.


I am grateful to Chris Williamson for pointing out this link and for these further fascinating details about the older dragon across the river in the City:

'Edward Pearce, a mason, was paid £4 to carve a wooden model, and Robert Bird, a copper smith, received £38 to make it......When it was first raised to its pinnacle, Jacob Hall, a trapeze artist of the day, accompanied it and performed a hire-wire act watched by a large crowd. In 1820, when it was lowered for repairs, an Irish worker rode down on its back, using his feet to manoeuvre it around obstacles.'

Posted by Gary Jenkins at 16:27 No comments: 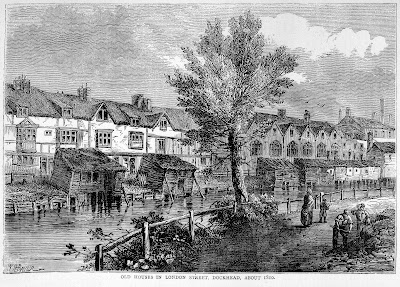 Yesterday to the Welcome Collection's Living with Buildings Exhibition to find that Bermondsey's most notorious slum (above) had a starring role. 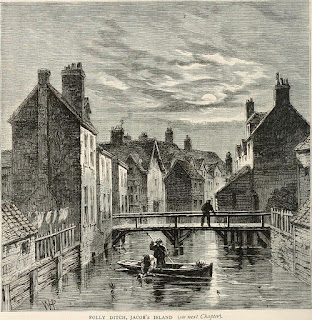 The exhibition looks at the impact that buildings have on our physical and mental health.

It charts the early efforts of nineteenth century philanthropists, activists, and politicians to deal with the appalling squalor in which London's poor lived, with the associated high levels of disease and early death.

Jacob's Island at the confluence of Folly Ditch (above) and the River Neckinger in St James's parish was widely thought to be one of the very  worst slums, described as a 'squalid rookery' and the 'Capital of Cholera.' 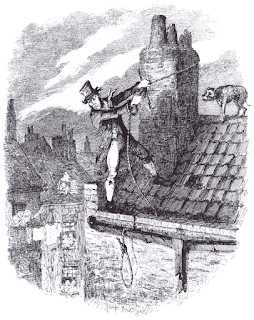 It was immortalised by Charles Dickens in Oliver Twist. The villain Bill Sykes (left) comes to a grisly end in the mud of Folly's Ditch and the author describes Jacob's Island in these memorable words:

"... crazy wooden galleries common to the backs of half a dozen houses, with holes from which to look upon the slime beneath; windows, broken and patched, with poles thrust out, on which to dry the linen that is never there; rooms so small, so filthy, so confined, that the air would seem to be too tainted even for the dirt and squalor which they shelter; wooden chambers thrusting themselves out above the mud and threatening to fall into it – as some have done; dirt-besmeared walls and decaying foundations, every repulsive lineament of poverty, every loathsome indication of filth, rot, and garbage: all these ornament the banks of Jacob's Island." 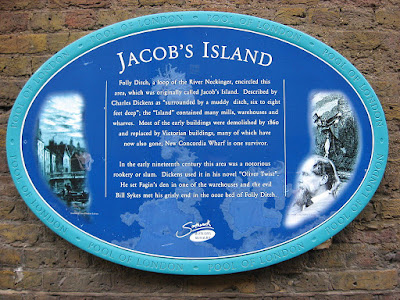 Jacob's Island is long since gone. The mid-Victorian warehouses that replaced the 'crazy wooden galleries' have been converted into luxury flats, but the nearby Dickens Estate, dating from 1934, remains a reminder of the connection with the great novelist, as is this commemorative plaque in Mill Street (above).

How good and pleasant it is when God’s people live together in unity!
It is like precious oil poured on the head, running down on the beard,
running down on Aaron’s beard,
down on the collar of his robe
It is as if the dew of Hermon
were falling on Mount Zion.
For there the Lord bestows his blessing, even life forevermore. (Psalm 133) 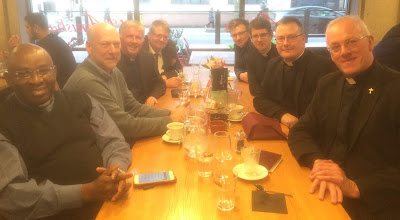 It's one of the shortest psalms but it packs a punch.

It speaks of how good it is when God's people live together in unity.

It makes me think of our Chapter (the ministers in our deanery - pictured above, except for Anna, who was unable to join us) here in Bermondsey which met for our annual New Year lunch today at Cafe Amisha in Grange Rd.

We are about as diverse a group as you can get theologically, but here's the best thing: we enjoy each other's company and actually like each other.

That doesn't 'solve' our differences of opinion but it does give a context of good affectionate and respectful relationships in which to explore them. In today's sermon from the Sermon on the Mount focussing of Jesus's command to love our enemies and do good to those who hate us, I referred to the story of Ruby Bridges (left) a six year old African American girl who lived in Louisiana in the early 1960s.

Schools were just being desegregated and little Ruby was the first black child to attempt to attend the William T Frantz Elementary School in New Orleans.

She had to walk through lines of angry protesters with a police escort. 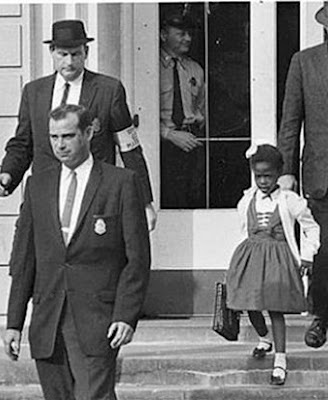 Her teacher watched from a window inside the school.

One day she noticed that Ruby's  was talking as she moved through the crowds.

She said to Ruby: 'I saw your lips moving but couldn't make out what you were saying to these people.'

'I wasn't talking to them' Ruby explained 'I was praying for them.'

Later a child psychiatrist, Dr Coles, who specialised in helping children who had lived through stressful situations, spoke to Ruby. He asked her what she prayed for as you walked by the protesters.

'I pray for me, that I would be strong and not afraid. I pray for my enemies that God would forgive them' she said.

Why did she do it? '"Jesus prayed that on the cross" she told Coles, as if that settled the matter. "Forgive them, because they don't know what they are doing."'

Ruby had got it, I told the congregation. And she was only six years old.

She had grasped what Jesus meant when he said: “But I tell you who hear me: Love your enemies, do good to those who hate you,  bless those who curse you, and pray for those who mistreat you. (Luke 6.27-28)

Moses: This is Your Life

Following on from last term's very successful Discipleship Explored course, St James and St Anne is running on a new Wednesday night course at St James, based on the life of Moses, starting on Wednesday 6th February at 7pm.

Each evening will include a meal, a talk, and time for discussion in small groups.

Our topic will be the life of one of the Bible's most fascinating characters and how he was used in God's plan of salvation.

To book a place please email the church office. Everyone is most welcome.

Here is the outline for the course:

Moses: This is Your Life

Posted by Gary Jenkins at 17:22 No comments:

At the Old Vic: a heart changed 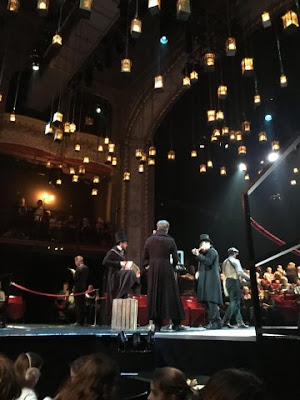 On the twelfth day of Christmas and the eve of Epiphany, to the Old Vic's magnificent production of Charles Dickens' A Christmas Carol.

It was a stunning visual spectacle, with the whole theatre amazingly reconfigured for the production.

Then there was the music, the singers, the hand bell ringers, the dancers and the sheer power of the old carols that had such a prominent part of the production, and which struck such a powerfully Christian note in the heart of secular London.

And that's without those deeply Christian themes of Dickens's 1843 classic.

In Christian terms, A Christmas Carol is a story of redemption, of a heart that is strangely warmed and wonderfully changed.

It is also a story of repentance.

That comes out very strongly in the Old Vic version. Repeatedly Scrooge is told that he must change. 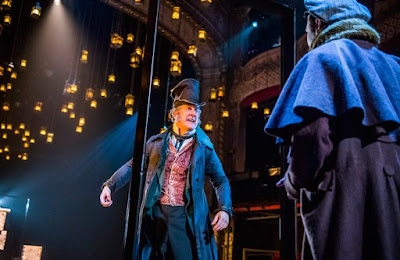 At a time when the Gospel is being remodelled as a message of unconditional acceptance without the need for transformation, it is good to be led back, by C.D., to the Bible's own focus on the power of the  redeeming love of God that brings us to repentance, and changes us.

Dickens got that completely right. 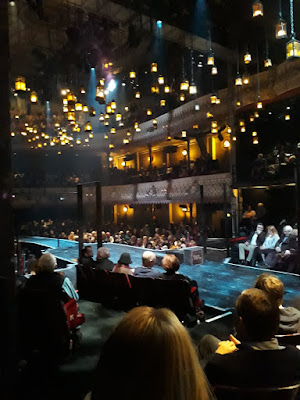 He has Scrooge say to the Spirit: "Assure me that I yet may change these shadows you have shown me, by an altered life."

Later Dickens comments on the transformed Scrooge:   'Some people laughed to see the alteration in him, but he let them laugh, and little heeded them; for he was wise enough to know that nothing ever happened on this globe, for good, at which some people did not have their fill of laughter in the outset; and knowing that such as these would be blind anyway, he thought it quite as well that they should wrinkle up their eyes in grins, as have the malady in less attractive forms.  His own heart laughed: and that was quite enough for him.'


PS. Christmas Carol is on at the Old Vic  until 19th January. Highly recommended.

Posted by Gary Jenkins at 17:26 No comments: 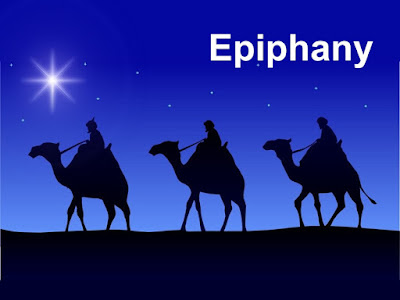 It was back to school for St James's School today.

First thing, the whole school assembled in church for our beginning of term Epiphany service.


We sang 'We three kings', 'It was on a starry night', and 'Come and join the celebration.'

Speaking on the story of the Wise Men from Matthew 2, Jacob contrasted the attitude to Jesus of Herod (he wanted to kill him), with that of the Wise Men who came to worship him. 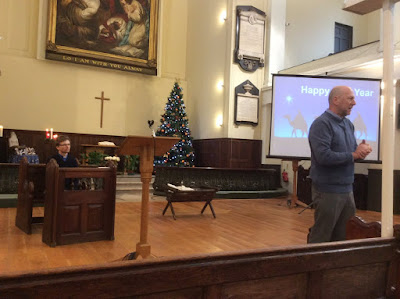 Posted by Gary Jenkins at 16:30 No comments: 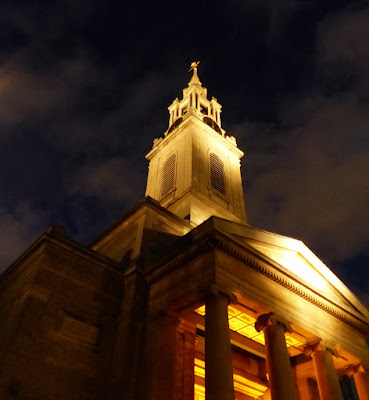 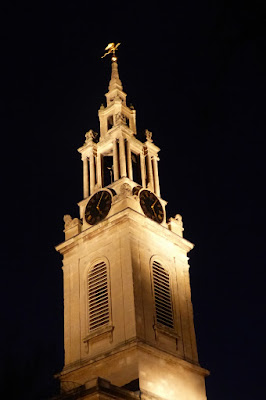 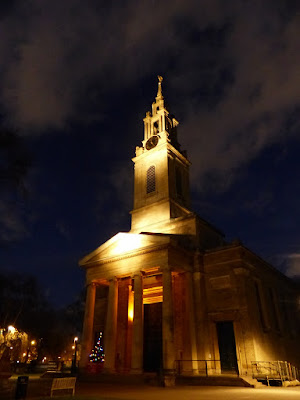 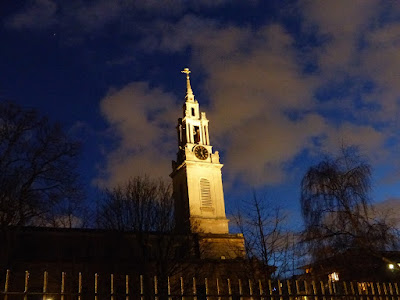 Posted by Gary Jenkins at 09:03 No comments: 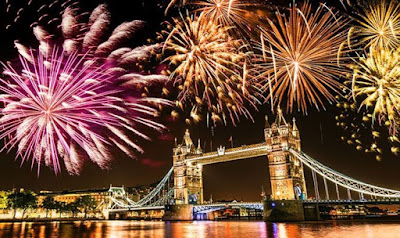