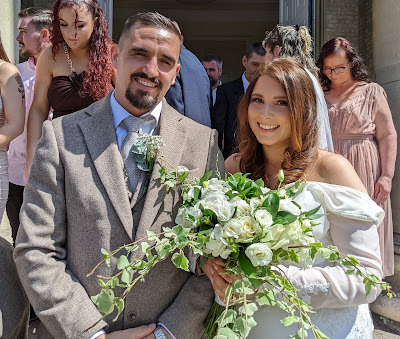 Congratulations to Danny and Amy married today at St James 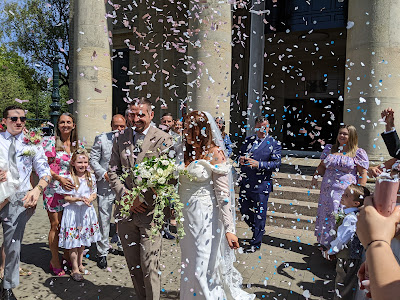 Posted by Gary Jenkins at 15:10 No comments: 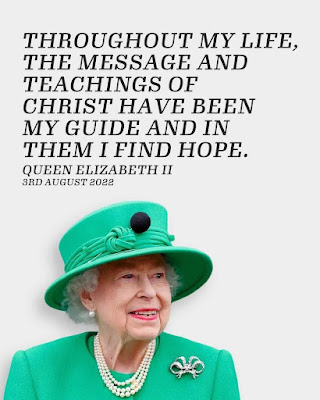 Posted by Gary Jenkins at 21:00 No comments:

If you have, you will sympathise with the Apostle Peter in Luke’s searingly honest account of the transfiguration

Before their very eyes Jesus was transfigured – transformed – his appearance became dazzling white, two long dead saints from the Old Testament, Moses and Elijah appeared too, speaking with Jesus, and Peter, utterly gobsmacked, said something rather silly: As the men were leaving Jesus, Peter said to him, “Master, how good it is that we are here! We will make three tents, one for you, one for Moses, and one for Elijah.”

Could I make you three little sheds to shelter in? If he was British he would no doubt have offered to make them  a cup of tea which is our traditional national response in times of crisis. Perhaps he wanted to somehow preserve the moment. Perhaps he was just trying to be helpful. Perhaps he just didn’t not what to say – that’s Luke’s theory anyway (verse 33).

1.    It shows the honesty of the Bible as a historical record of the highs and lows of God’s people – their points of deep spiritual illumination and the times when they just don’t get it

2.    It has a hint of humanity. It shows how hard we mere mortals find it to grasp the immense glory of God, even when it is staring us in the face. Quite literally we do not know what to say in the face of the glory of God.

It was, first of all, A moment of revelation

28 About a week after he had said these things, Jesus took Peter, John, and James with him and went up a hill to pray. 29 While he was praying, his face changed its appearance, and his clothes became dazzling white. 30 Suddenly two men were there talking with him. They were Moses and Elijah, 31 who appeared in heavenly glory and talked with Jesus

Suddenly the appearance of Jesus was transformed. This was a private moment of revelation for the inner core of the disciples, Peter, James, and John who would later have the task of telling the whole world about Jesus

Until that moment they had known Jesus, they had heard his teaching, they had witnessed his miracles, but so far what they had seen – with their eyes – was Jesus the man

And with him they saw Moses and Elijah, representing the Law and the Prophets, representing everything God had said and done in the Old Testament, speaking with Jesus

The message was clear here in the flesh, transformed with the glory of God, was the God, now clothed in flesh, that those great saints of the Old Testament, Moses and Elijah had served

A moment of communication

34 While he was still speaking, a cloud appeared and covered them with its shadow; and the disciples were afraid as the cloud came over them. 35 A voice said from the cloud, “This is my Son, whom I have chosen—listen to him!”

In the Bible a cloud often speaks of the glory and wonder and hiddeness of God, and as the cloud envelopes them God speaks to them in unmistakable terms

He is the one. He is my Son. Listen to him

And of course, this message is not just for Peter, James, and John, but for everyone in the world: for you, and me and everyone here this morning

God says to us ‘listen to Jesus.’ He is the one. He is the true Son of God.

There are many voices out there, in the press, on the TV, in our families, in our schools, a multitude of voices all demanding our attention, (checking our phones, Facebook, emails) all trying to persuade us to listen to them and obey them

But here is another voice, a voice from heaven, that says ‘listen to Jesus

Listening is more than just hearing; it means paying attention to, it means obeying

Later these same men would see Jesus in disgrace, and dishonour, shame and weakness, dying on a Roman cross

But in witnessing the transfiguration, they had advanced sight of what Jesus would be – the radiant, glorified, risen Lord

The radiant glorified Lord that he is now

We have not yet seen him, but if we believe in him, we shall do

But the transfiguration, witnessed by Peter, James, & John reveals to us, as it revealed to them, what we will see: the glorified, dazzling Lord, shining with the glory of God

The living God says to us: "This is my Son, whom I love. Listen to him’

Posted by Gary Jenkins at 09:49 No comments: