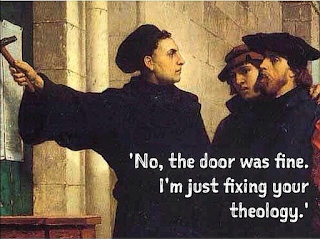 Today is Reformation Day, and Tim Farron MP, former leader of the LibDems, tweeted this comment 'Martin Luther's 'discovery' was that salvation is not down to how good or strong you are, it is down to how good and strong God is.  That's really good news.' 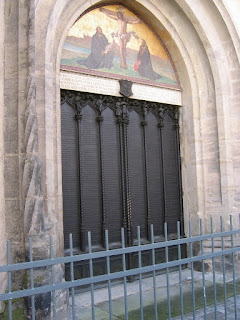 When Martin Luther published his 95 Theses on October 31st 1517, five hundred years ago today (and probably posted them to this door in Wittenberg, pictured right), he sparked a spiritual revolution that changed the face of Europe, and eventually, much of the world.

There were some unhappy outcomes of the Reformation, not least a divided church, but at the heart of the movement was a rediscovery of the life-changing, liberating, gospel of grace.

It's all summed up in that great reformation word: ALONE.

We are saved by grace alone through faith alone in Christ alone according to Scripture alone for God's glory alone.

As Tim Farron so rightly said 'salvation is not down to how good or strong you are, it is down to how good and strong God is' and we have the Reformation to thank for bringing us back to this, to what Martin Luther called the church's 'true treasure,' 'the most holy gospel of the glory and grace of God.'

May it be ever treasured and widely shared, and to God alone be the glory! 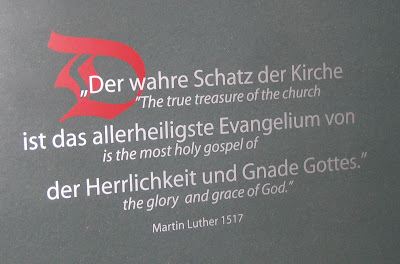 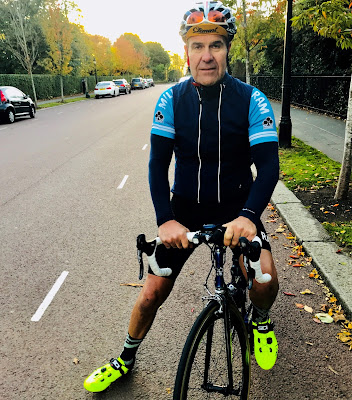 St Anne's churchwarden, Graham Russell, pictured (left), having completed on Sunday 148 miles of the outer circle of Regents Park, one mile for each year of St Anne's existence, and a total ride of 53 laps.

This was a sponsored ride in aid of St Anne's, and it is not too late to contribute to Graham's total. See his crowdfunding page here

Congratulations Graham, and now for a well-earned rest.... 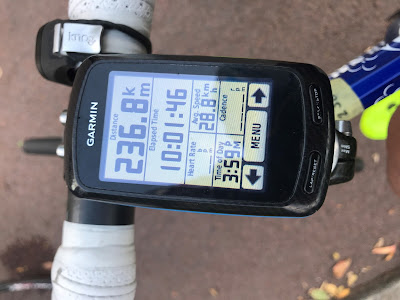 Posted by Gary Jenkins at 10:28 No comments:

Reformation at the Cathedral 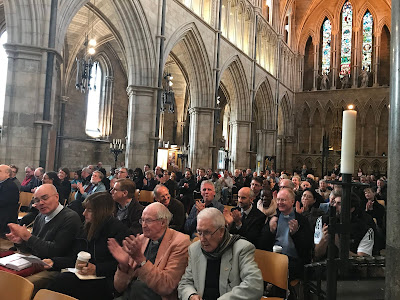 To Southwark Cathedral for this year's Clergy Study - on the Reformation.

2017 marks the 500th anniversary of the Reformation, that great spiritual movement, that led to the rediscovery of the heart of the Gospel, and the reform of the church, not least our own Church of England, where the great truths of the reformation remain enshrined in our 39 Articles of Religion and the Book of Common Prayer.

It was good and heart warming to be reminded of that by our second speaker, Ashley Null, which set us up nicely after lunch for a brilliant lecture by Prof Barclay on the gift of God's grace.

We even sang a hymn by Martin Luther. Excellent. 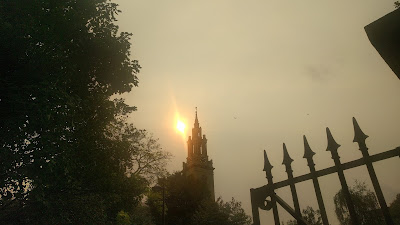 Thanks to Parisa for this lovely photo of the weird sky over Bermondsey on Monday afternoon.
Posted by Gary Jenkins at 11:16 No comments:

In Bermondsey, all is safely gathered in..... 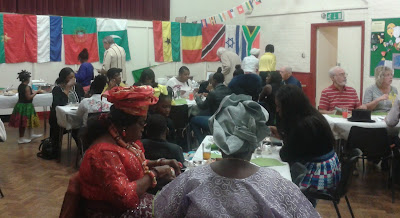 St Anne's Hall was the venue for our International-themed Harvest Supper on Saturday.

National costumes, ethnic dishes, and songs and dances from across the globe, contributed to a fascinating and delicious evening.

Here is the Ugandan contingent in full flow, adding their contribution to Nigeria, Sierra Leone, Jamaica, Togo, and many other places: 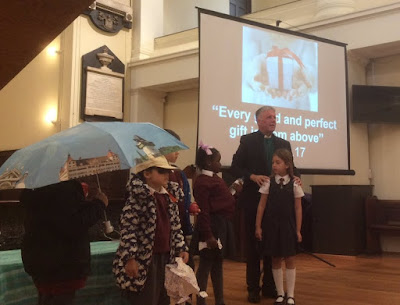 Following the harvest services in both churches, it was the turn of St James's School to have their Harvest Service in church today.  I spoken on the verse from James 1, 'Every good and perfect gift' is from above, and I had some of the younger children open gifts, symbolising the gifts that God gives us in his creation (the rain, the sun, water, drink, each other).

Then with lots of gifts collected for Manna's work among the homeless, we heard details of the children who had been appointed to the Junior Faith Committee (to work with the governors' faith committee overseeing RE and collective worship), and to the Junior Leadership Team who represent children's views in the school. Well done to all of them. 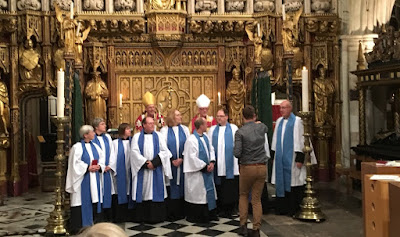 'Readers' are Church of England lay preachers and yesterday a whole bunch of them were licensed at Southwark Cathedral, including David McEvoy of St Alphege, Greenwich, who did a placement at St James during his training, and Jan Greaves, from my old parish of Holy Trinity, Redhill.

It was very special to see David and Jan licensed, and very moving too to hear in the prayers the name of our dear late lamented Trevor Knight (of St Peter's, St Helier), who this year went to be with the Lord.
Posted by Gary Jenkins at 21:35 No comments: 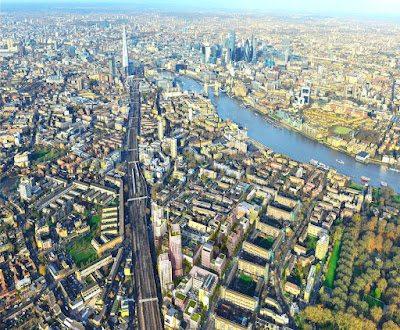 To the Biscuit Factory to see Grosvenor's final plans for the £500m development of the site, which will provide a new secondary school, 1,350 homes for rental, shops, offices and up to 1500 jobs, as well as the refurbishment and re-use of 165 under-used railway arches.

Postives of the scheme will be new access to the Blue, better pedestrian routes through the site, and several public open spaces.

Its a huge project that will take the best part of eight years to build, once planning permission is granted. 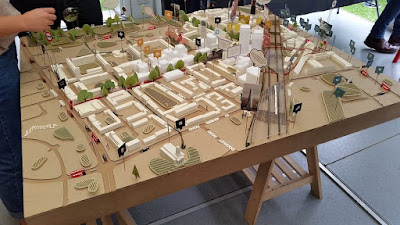 Posted by Gary Jenkins at 18:01 No comments: 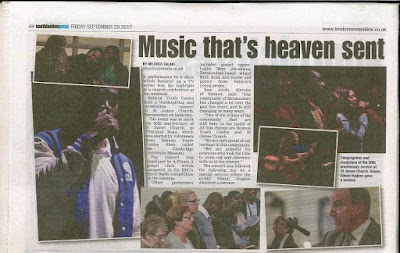 Posted by Gary Jenkins at 13:19 No comments: 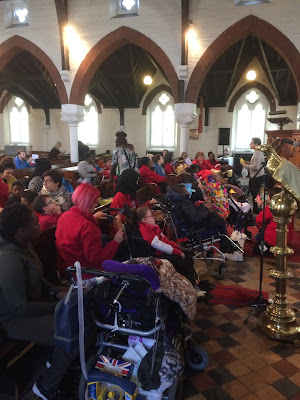 St Anne's Church has long had a link with Cherry Garden School, the special school in Southwark Park Rd, and for a number of years Paul has been a governor of the school.

Each year children, teachers, and parents come to St Anne's for their harvest celebration, in the week following the church harvest festival, bringing gifts for the Manna Centre and its work among homeless people, and it was good to welcome the children again this week (left). 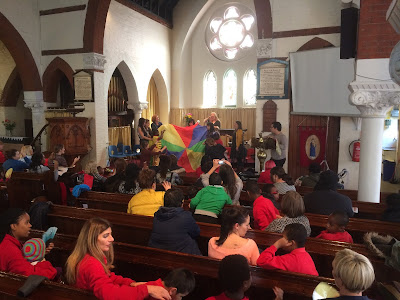 And here from the school's Twitter feed........ 'we think Michael is perfectly cast in our harvest festival this morning. He is our jumping frog!' 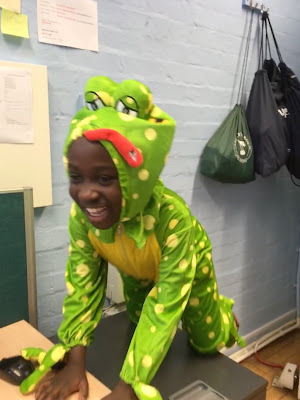 Posted by Gary Jenkins at 17:30 No comments: 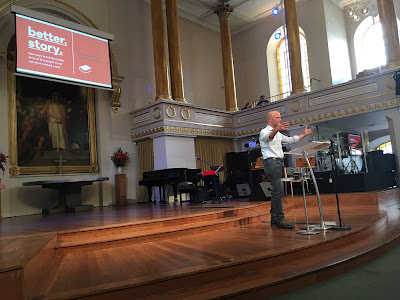 Yesterday we went to All Souls, Langham Place, just off Oxford Street, for the annual Evangelists Conference, which this year had the theme 'Better Story.'

It was subtitled 'new ways to tell the better story of the gospel in our narrative-soaked world.'

The conference considered the power of stories, including in advertising and political campaigning,  and then asked how we could communicate the gospel in story form, making the most of the compelling attention grabbing nature of stories and their emotional power. 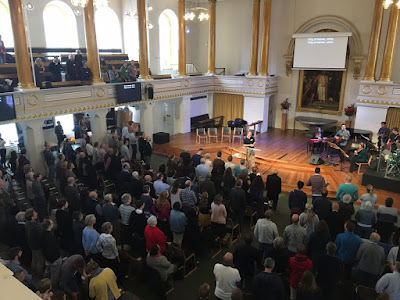 The day ended with a kind of specimen sermon - based on the narrative of the crucifixion, that used stories and illustrations particularly well, kind of showing us how it was done. It was a really excellent conference. 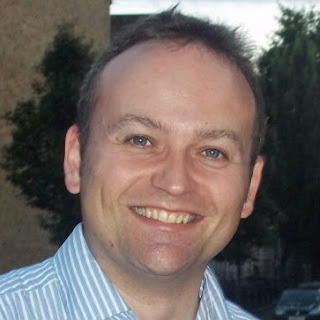 It was good to hear about Neil's work in Parliament and for his constituents here in Bermondsey, and his reflections on the recent party conference.

We discussed some of the key local issues - housing and crime (particularly moped based crime and that affecting mobile phones) seem top of the agenda at the present moment.

At a time when the world can be very cynical about politicians, it was good to be reminded once more of the thousands of public-spirited individuals, from all parties, who work so hard to serve the people of their area.

It's been a weekend of celebrations. 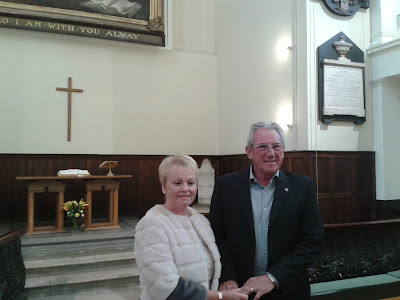 First, Alan and Linda, who were married at St James fifty years ago on Saturday, came to the church to give thanks to God for fifty happy years of marriage and to renew their marriage vows.

Theirs must have been one of the very first weddings in the church after it was re-opened.

Their children and grandchildren were all there, and for Linda, it was a total surprise, kept secret by Alan and the family, until she met me in the church porch.

It all started a few weeks ago when a man rode up on a motorbike in the churchyard and said 'we got married here 50 years ago. Our anniversary is on the 30th and I wondered if we could do something to mark it, as a surprise for my wife.'

So it happened and what a happy celebration it was. 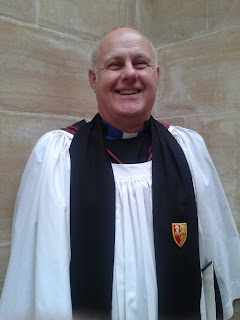 Next up was a double celebration for my good friend, Les Wells, made Team Rector of Horley on Saturday night, and honorary canon of Southwark Cathedral on Sunday afternoon (right).

Some time ago Les told a Men's Breakfast at St James the story of how he came to faith. His wife went into labour with their fifth child, and while they waited for the ambulance, Stephanie said 'Les, you'll have to deliver this one.'

Panic. Les decided to pray. All went well, and that tiny baby is now a big strapping young man, but Les didn't forget that he had asked for the Lord's help. So, with the older four children in tow, he came to the church, St Peter's, St Helier, where I was vicar, to give thanks.

Later all five children were baptised from the oldest to the youngest in one glorious service and Les, well he just grew and grew as a Christian.

He joined the local ministry team. He sang in the music group. He shared his faith far and wide - and in due course he was ordained and in time became the vicar of St George's Church, also on the St Helier estate. As an accomplished barber, he also cut my hair, but that is another story.

And now he has moved to Horley, and the Bishop has recognised all that Les has given as a vicar in Morden, and Area Dean of Merton, by bestowing on him the honour of making him a canon of south London's cathedral. Like me he is a south Londoner, born and bred, and that makes it really special to think of Les as one of our new canons.