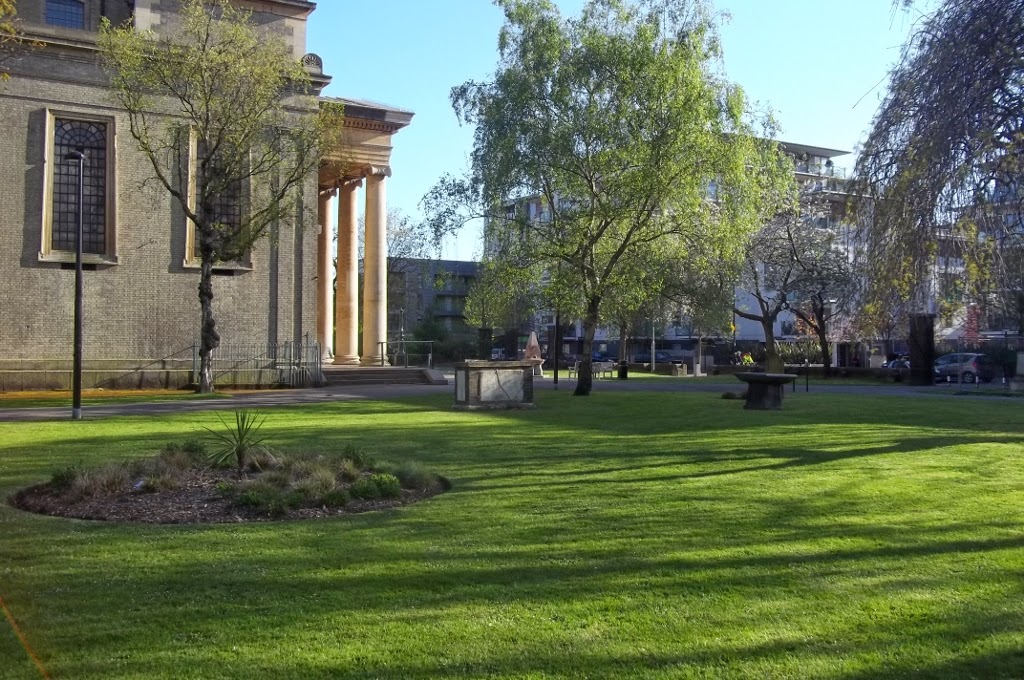 A great meeting of the Friends of St James's Churchyard tonight where Southwark parks manager, Andy, gave us a tour of the churchyard showing us various improvement works currently taking place.

These include a revitalised pond (thanks to the Community Volunteers), a new border near the Gregorian, and two wildflower meadow areas, just planted today.

Thank you Southwark Council for all you are doing to beautify this little green area of Bermondsey. 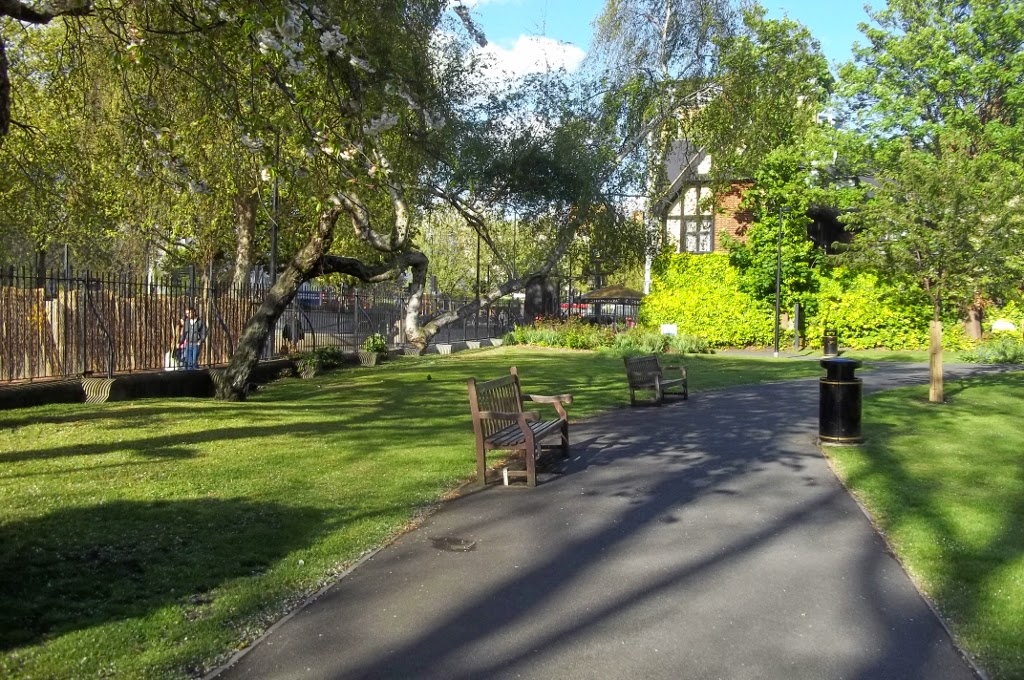 Posted by Gary Jenkins at 20:44 No comments: 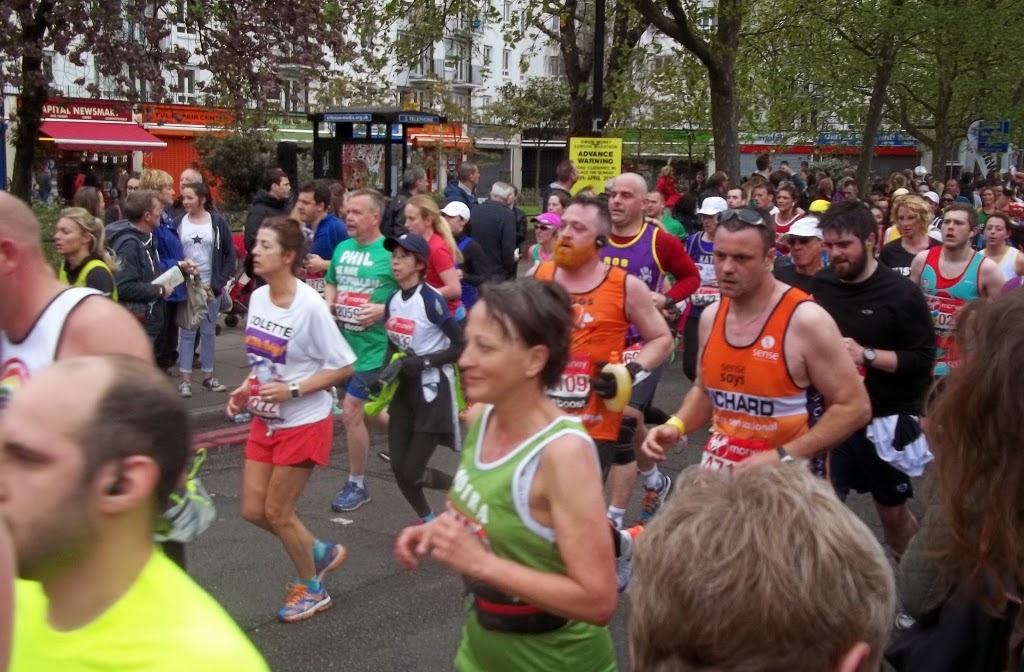 Hot on the heels of the Unlock walk was the London Marathon, with Jamaica Road closed to traffic, and 37,000 runners passing through Bermondsey cheered on by large and happy crowds.

I particularly like the group of people who had decided to give Random Encouragement by loudly calling out words of encouragement and support to complete strangers among the thousands of runners 'Come on, Tim', 'Well done Richard' 'Keep going Audrey' 'Cheryl you're doing well.' 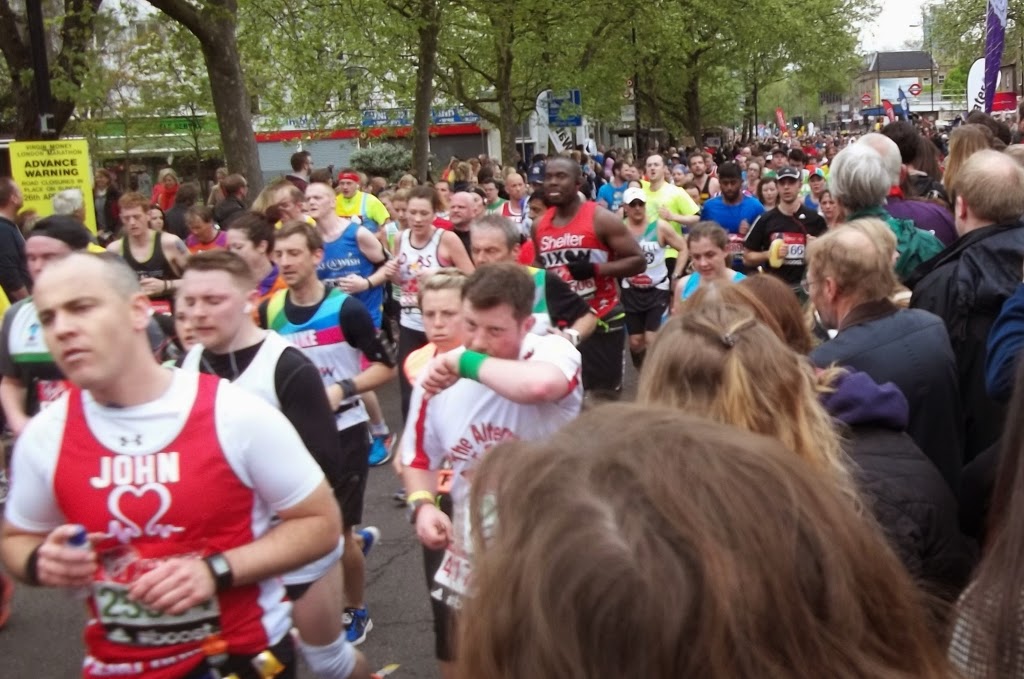 Posted by Gary Jenkins at 13:06 No comments:

The very first time I stepped inside St James, Bermondsey was on an 'UNLOCK' sponsored walk in 2007, little thinking that six years later I would be the vicar, and eight years later, St James would once again be a checkpoint on the Unlock London walk.

UNLOCK is a Christian charity with a passion for mission in the most deprived urban areas of the country.

It aims to unlock stories of the 'down-to-earth-Christ' and the annual sponsored walk is its  main source of income.

From Bognor Regis, Wimbledon, High Wycome, Bedford, Cambridge, Redhill, Clapham, Wandsworth and West Sussex, they came, about 700 in all, some in groups, some pairs or singly, for a seven mile trek from Bermondsey to Brockley, stopping off at churches on the way for a refreshments, a rest and the chance to find out about the exciting and challenfing realities of urban mission.

It was great to welcome them, lovely to meet some familiar faces, too. Long live the Unlock walk.

Posted by Gary Jenkins at 19:38 No comments:

A year in view Both churches had the chance to take stock of the past year, look forward together, and eat a slap-up meal, courtesy of the Jamaica Road Fish Bar. 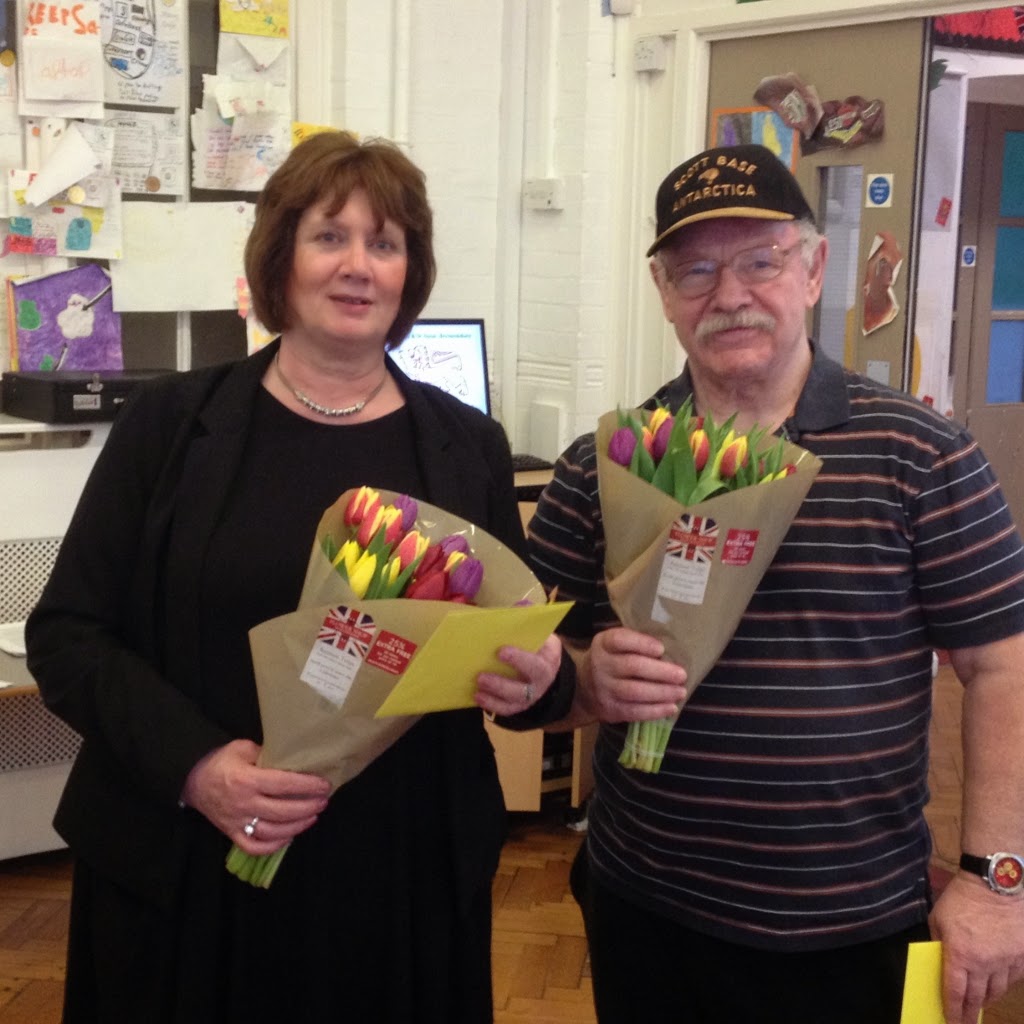 It was the time, too, to elect churchwardens and church council members - with the opportunity to say special thankyous to two very longstanding churchwardens, Pat and Ken (right), who have served us so well at St James and St Anne's respectively. Fortunately both are going to continue serving albeit in slightly different roles. So it wasn't so much a retirement but just a very big 'thank you.'

And here is our video of a year in the life of St James & St Anne, shown last night: 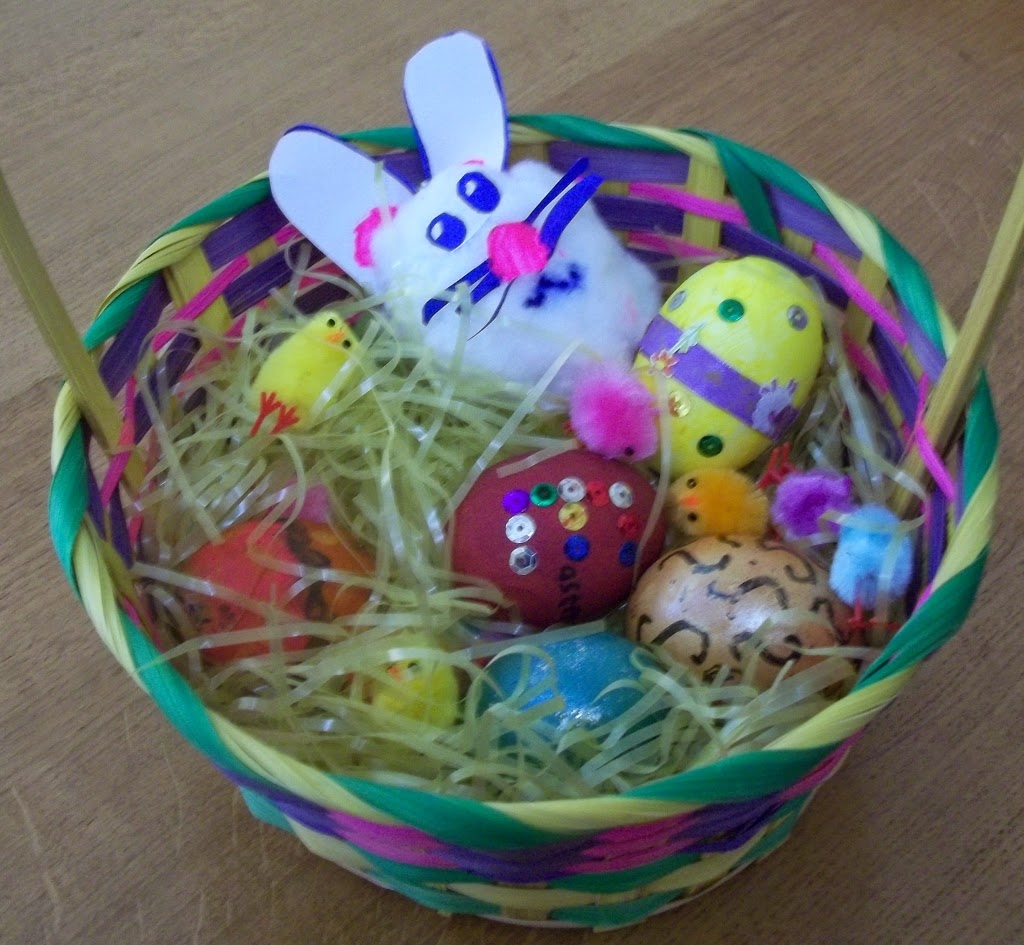 The children of St James's School were back to school today after their Easter break.

First up was the beginning of term service in the Church with a distinctly Easter theme.

As term ended we launched our Easter Egg competition for the holidays. Lots of children brought their finished masterpieces today - now the judging starts and we will be handing out prizes to the winners at church assembly next week. Well done to everyone who took part.

Meanwhile, out in the Churchyard, it really did feel as if Spring had well and truly come: 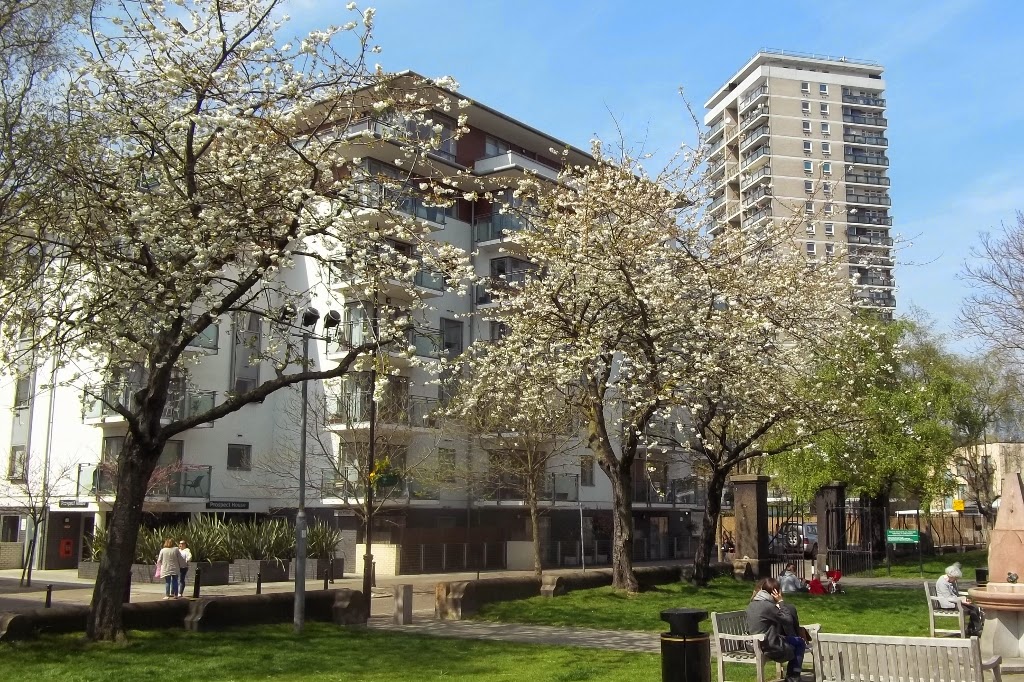 Posted by Gary Jenkins at 23:30 No comments: 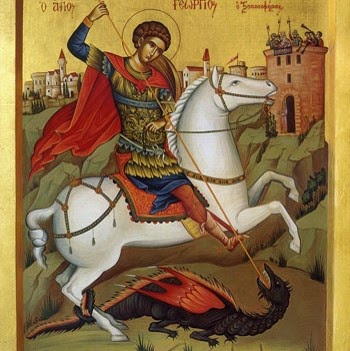 Today at both churches we had services for St George's Day.

At St James I said: 'I regret to say that St George was not a Bermondsey boy. He was not even an English lad. He was a Greek, a Christian, a Roman soldier and a martyr for his Faith.'

'He was born sometime between the year 275 and 285. In the year 303 life became very difficult for Christians in the Roman Army. The Emperor issued an edict that all soldiers must worship the Roman gods.'

'In front of his fellow soldiers George declared that he was a Christian and worshipped Jesus Christ and him alone.'

'The Emperor who appreciated George’s military prowess attempted to persuade George to relent and even offered him gifts of land and slaves if he would but worship the gods of the Romans.'

'But George stood steadfast and, after horrible torture, he was beheaded by the Romans on April 23rd 303. Before his execution George gave all his wealth to the poor. Afterwards a pagan priest and the Empress Alexandra herself, who had witnessed George’s sufferings for his faith, became Christians themselves. 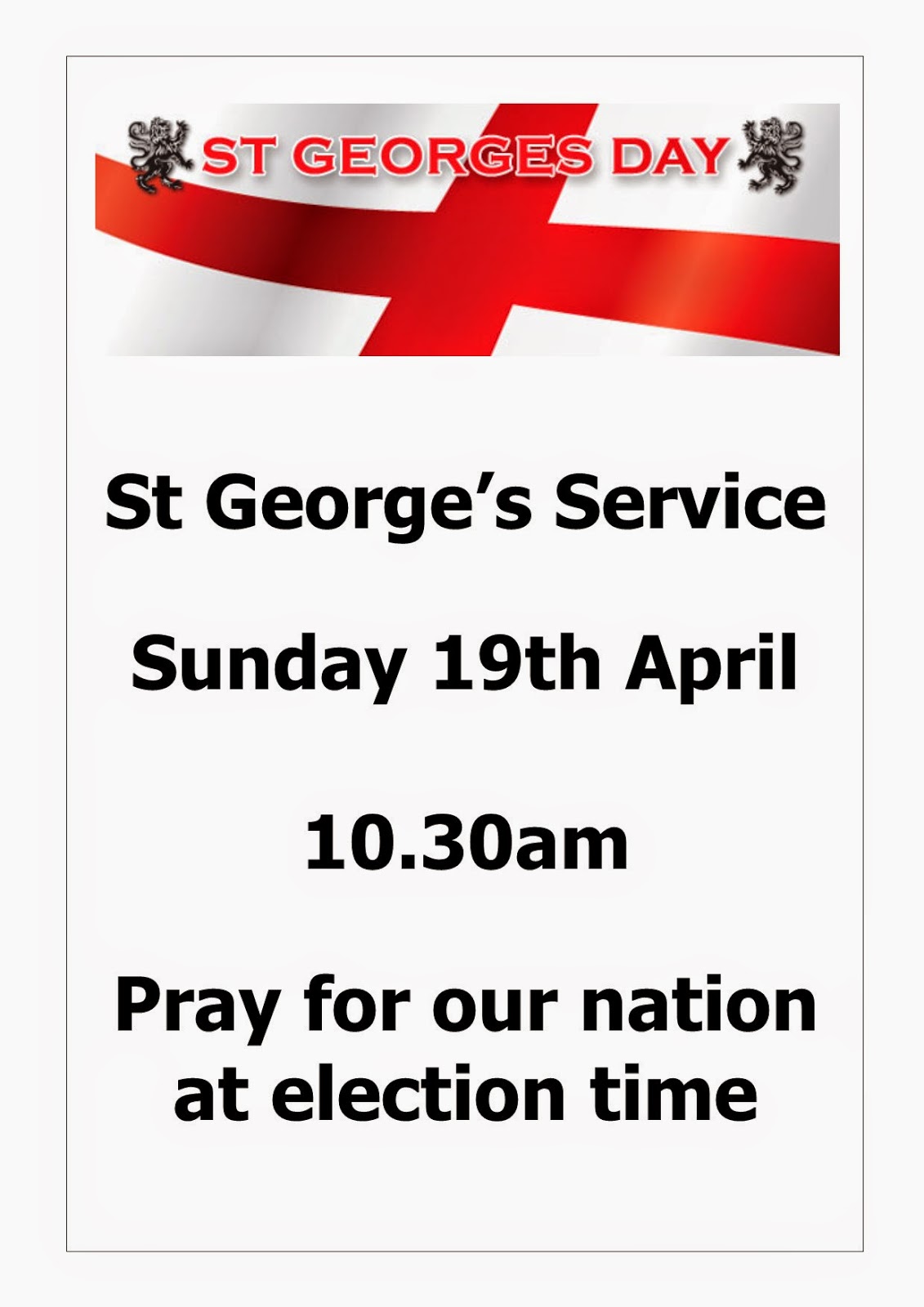 'Since year 303 George has been honoured as a martyr, a brave soldier and servant of Jesus Christ. The Church remembers him on the day he died, 23rd April, St George’s Day, the day we remember him in England as the Patron Saint of our nation.'

'But what about the dragon?,' I asked. 'That bit' I said'  seems to be a myth, a legend, but….. in the book of Revelation, our first reading, the Devil is portrayed as a Dragon. There he is triumphantly defeated.'

'Like his master, Jesus Christ, George, battled with temptations thrown at him by the Devil. Like his master, the Lord Jesus, he didn’t give in to them, and in his martyr’s death, George really did defeat the dragon that wanted him to deny his Lord. '

'George in his own life learnt the truth of our second reading where Jesus say to his disciples:


“If the world hates you, just remember that it has hated me first.  If you belonged to the world, then the world would love you as its own. But I chose you from this world, and you do not belong to it; that is why the world hates you.  Remember what I told you: ‘Slaves are not greater than their master.’ If people persecuted me, they will persecute you too;

I went on to say that here living in England, we have a privilege that St George could only dream of.

We get to choose the government. To vote, and to vote wisely for the good of the community and the good of the nation, is both a great privilege and a great responsibility.

Later, five members of the congregation, led us in these prayers, interspersed with the sung response, Come all ye people, come and praise your maker:


For our nation’s Christian heritage, for Christ’s brave saints and martyrs of every tribe and nation, we give thanks to the Lord

For this nation at the time of the General Election, for wisdom and discernment for the electorate, for righteousness,  justice and mercy, in our political  life, we pray to the Lord

For people of every nation, that God may bless the peoples of the world, that his kingdom may come, and his will be done on earth as it is in heaven, we pray to the Lord

Posted by Gary Jenkins at 14:55 No comments:

To have and to hold 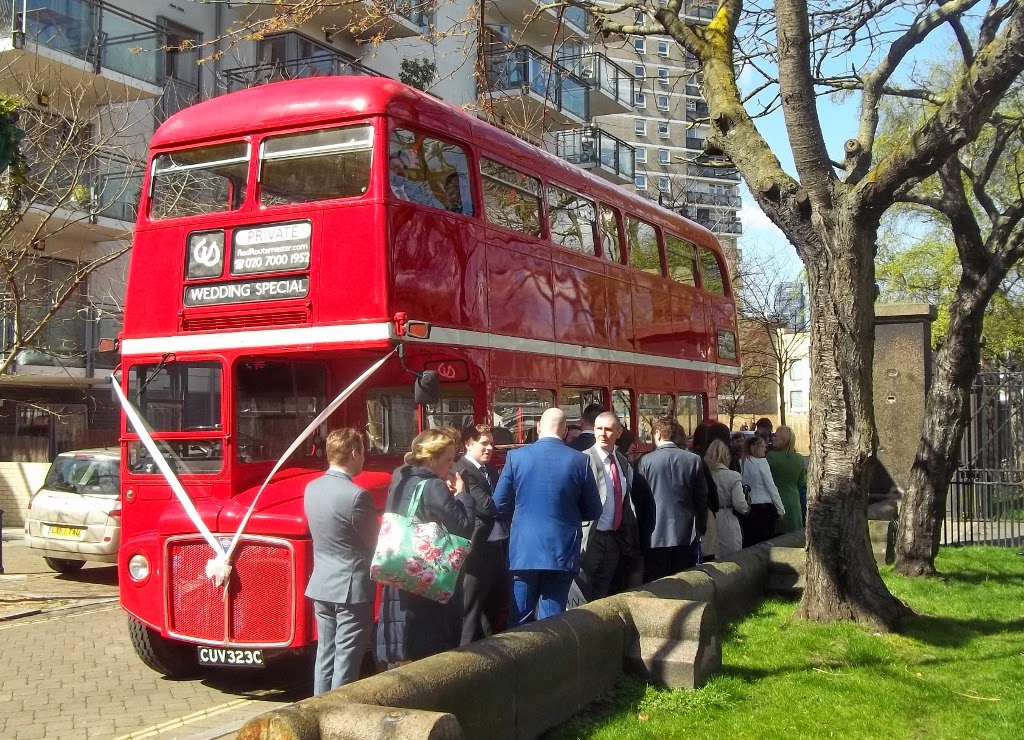 All aboard the wedding special!

Two double deckers were parked up in Thurland Rd this afternoon to transport Claire and Simon's wedding guests off to their reception, after their wedding in St James this afternoon.

A full church, lots of confetti, the bells ringing out, and not forgetting the Routemasters, it was quite a service. Congratulations Claire and Simon, and God bless you on your special day

The wedding season has started early at St James this year. This was our second Spring wedding, with another one, next week. Wonderful.

What can be better than a proper church wedding and those amazing ancient but ever new promises that have brought blessing to millions down the centuries: to have and to hold, from this day forward, for better, for worse, for richer, for poorer, in sickness and health, to love and to cherish, until death us do part.. 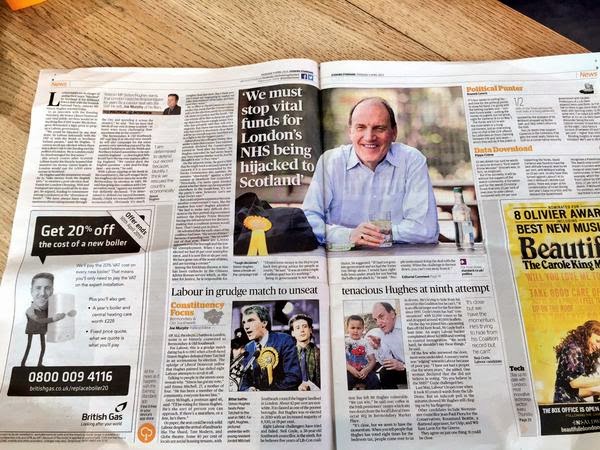 Tonight's Evening Standard has a two-page spread on Bermondsey and Old Southwark, one of the battleground consituencies in this forthcoming General Election.

Meanwhile on behalf of Christians for Transformation in Bermondsey and Rotherhithe (C4T), St James's will be hosting General Election Hustings on Saturday 2nd May at 7.30pm.

The Conservative, Labour, Liberal Democrat and Green party candidates have all confirmed they are coming.

The churches are organising it, but it is an event not just for church members, but for the whole local community - a chance to meet and question the candidates. Everyone is very welcome. 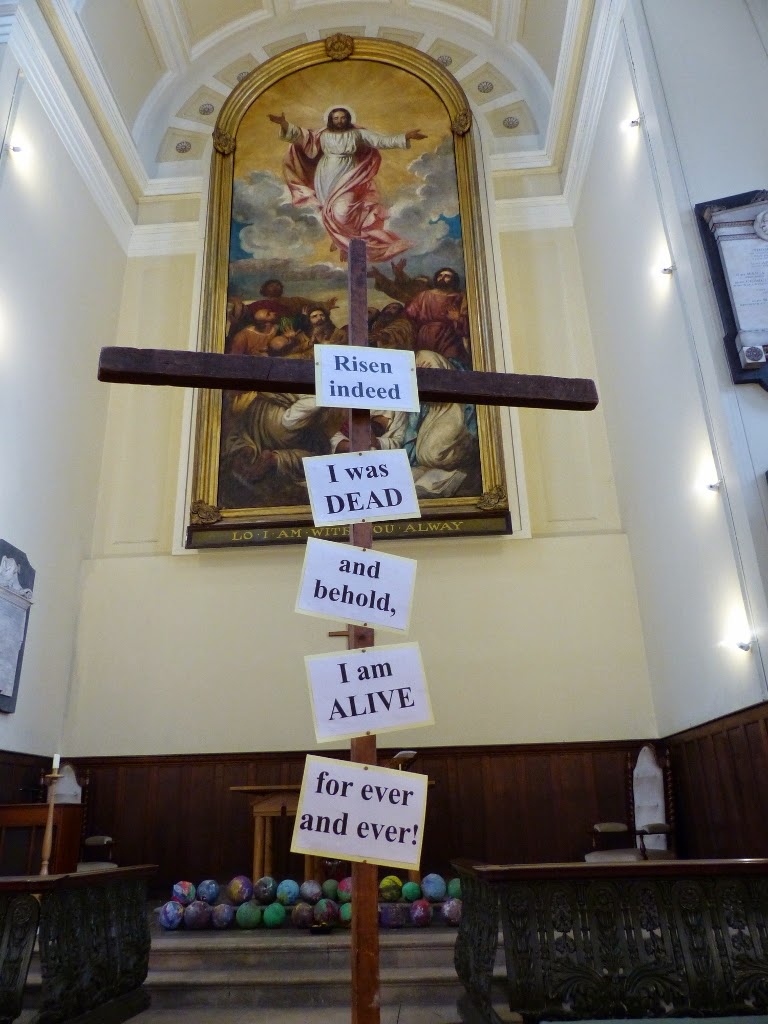 Posted by Gary Jenkins at 06:00 No comments: 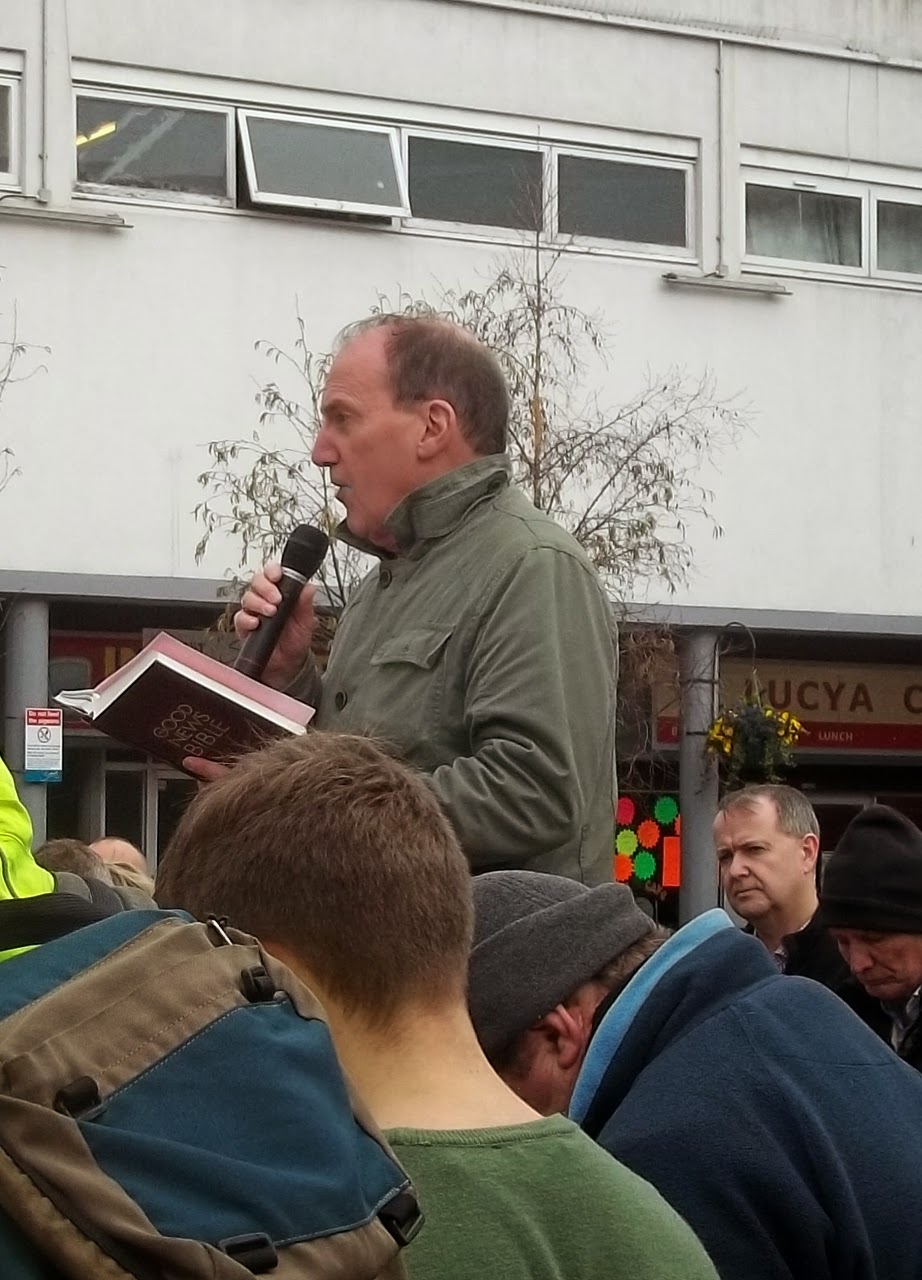 It was good to be joined by members of St James, St Anne's, St Mary's, St Philip's, City Hope, & Haddon Hall as we sung, heard God's word, and prayed for the people of Bermondsey.

Earlier St James and St Anne's had met at St Anne's for a joint family service, before walking in procession to the Blue where we met the other churches.

Later, back in St James, we had lunch together - and a wonderful Bermondsey tradition, delicious homemade soups - before Jos led us in a brilliantly thoughtful multi-media meditation on the meaning of the cross.

Posted by Gary Jenkins at 16:20 No comments: 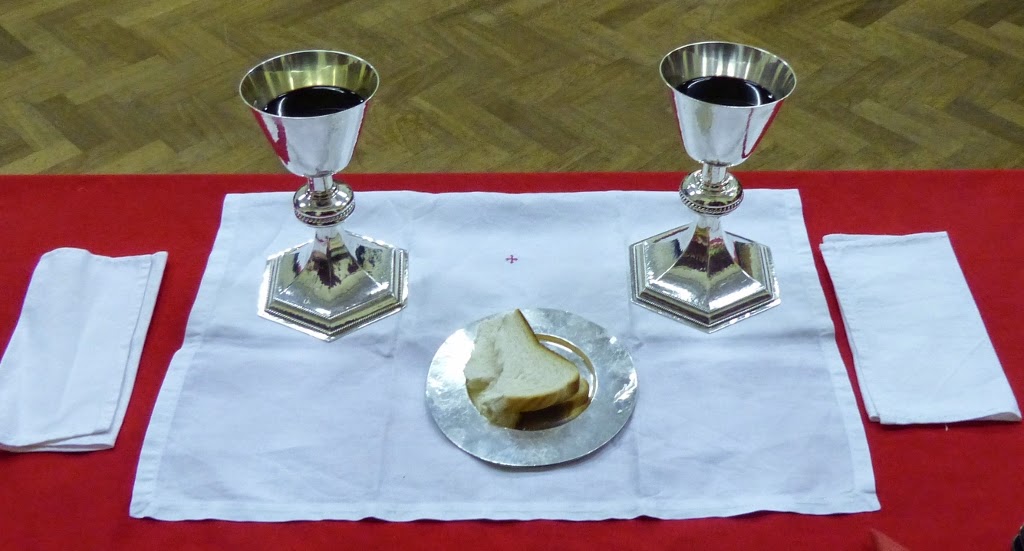 It was 'the night that Jesus was betrayed,' the night he met with his disciples for the Last Supper, the night he washed their feet, the night he gave them the New Commandment to love one another (the latin word for commandment, mandatum, gives us the name for the day, Maundy Thursday), the night he took bread and wine and said 'whenever you do this, do it in remembrance of me.'

Last night we sat down to a wonderful meal - a big thank you to everyone at St Anne's - and people from St Mary's, St James, and St Anne's ate together, sung, heard God's word, and shared the bread and wine and remembered Jesus. It was a great event, the beginning of our Easter celebrations here in Bermondsey. 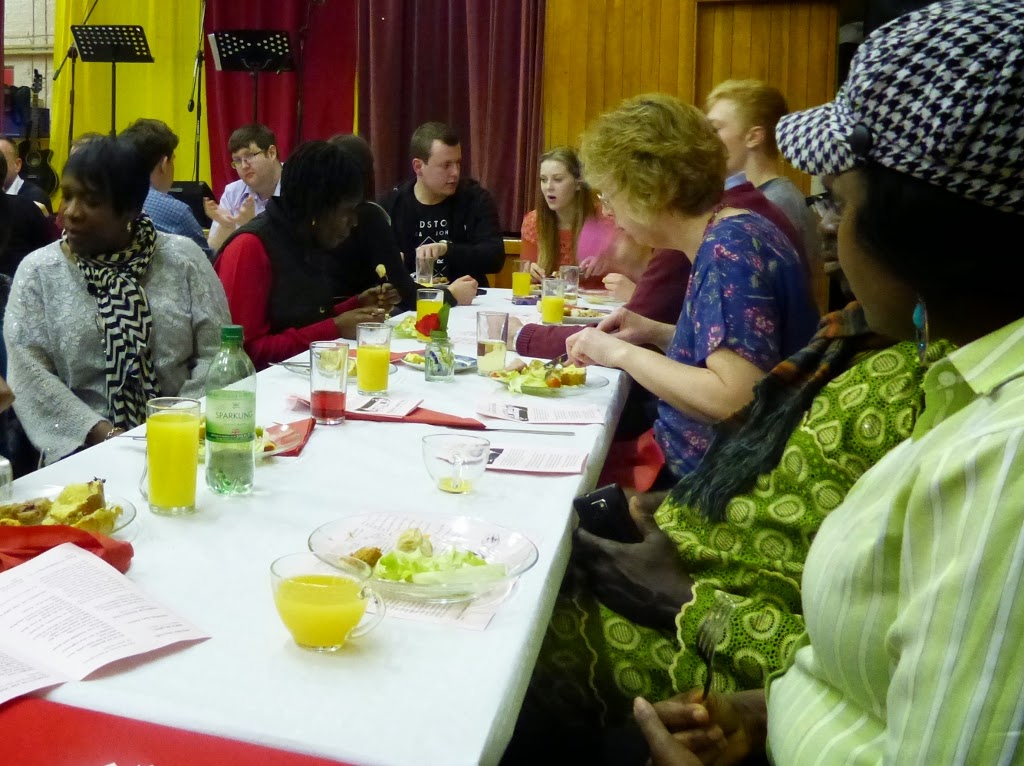 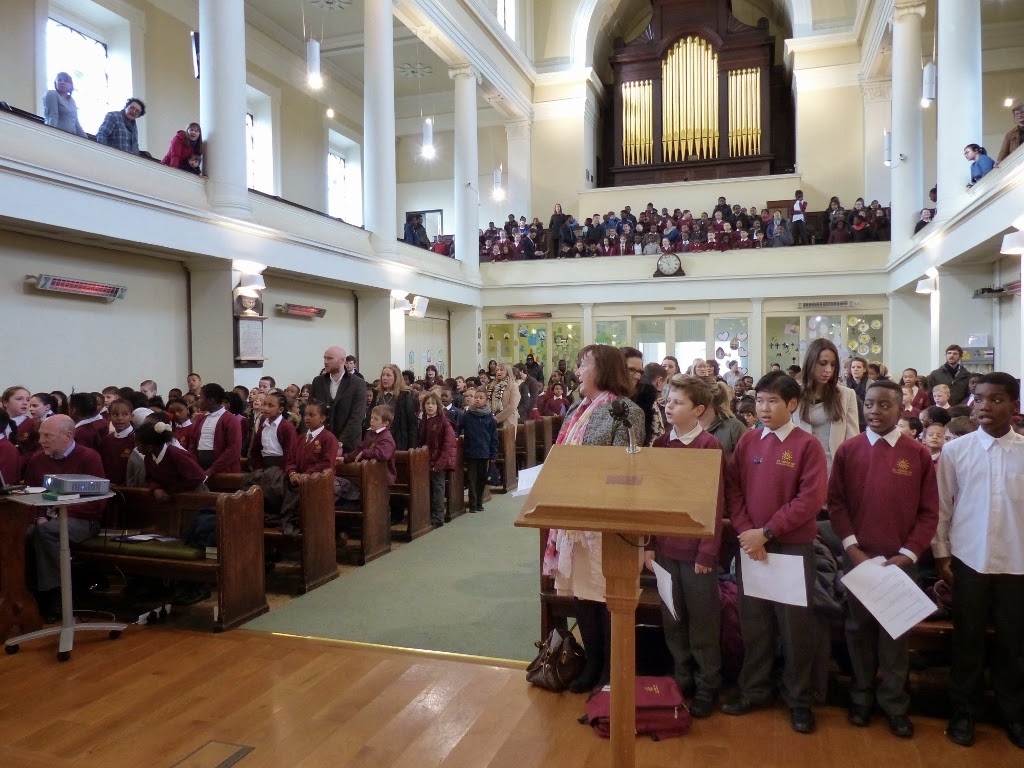 The Junior Faith Group at St James's School planned this morning's end of term service in the church.

We had dancers, a drama, a brilliant song by the school Gospel choir, and the members of the Faith Group led and narrated the service, at which we sung some favourite songs, and remembered how on the first Maundy Thursday, Jesus washed the disciples feet. 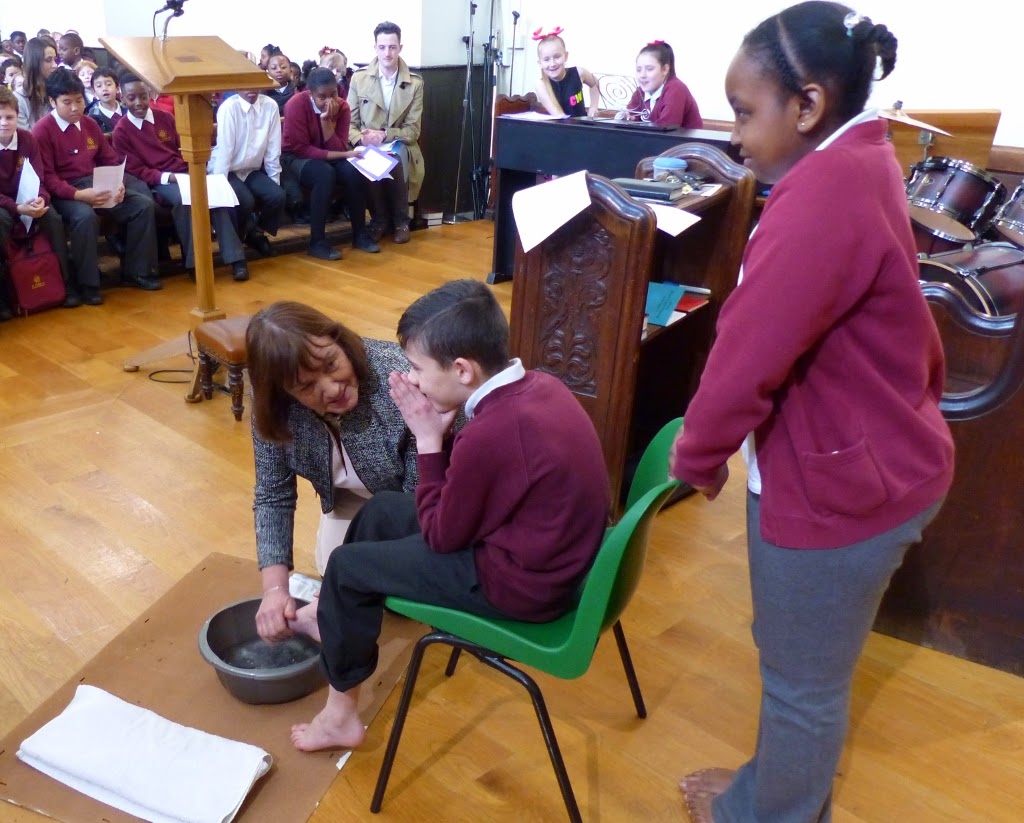 It was an upside down kind of day when the King of Kings and Lord of Lords took the place of a servant. Translating that to Bermondsey in 2015, the Junior Faith Group came up with the idea of Mrs Willis (right) and Miss Mailey, our Head and Deputy Head, doing something very similar. It was a special moment, and Paul reminded us that Jesus did the first foot washing as a kind of example of how we should serve one another.

It was a great service, and here from the school Twitter account, are some more photos of the occasion: 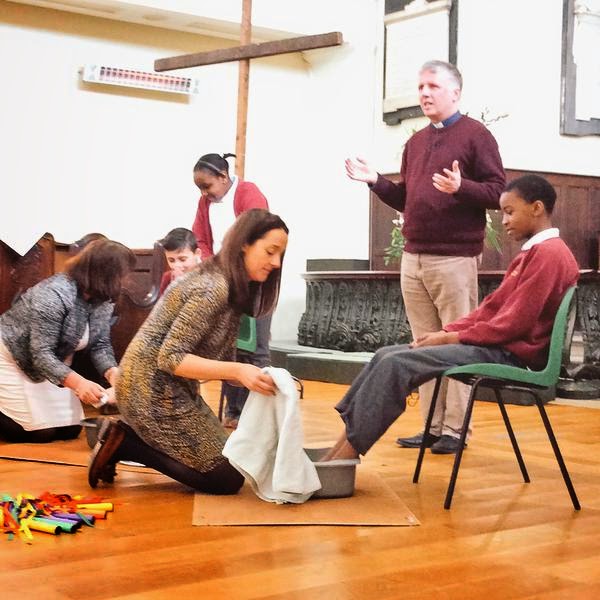 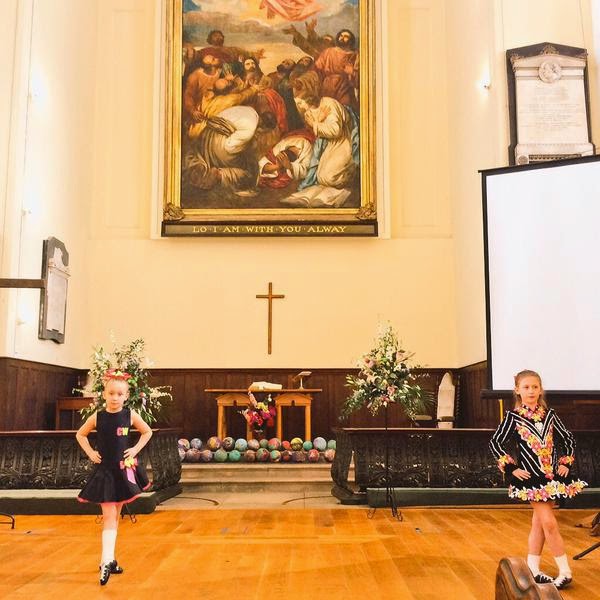 Posted by Gary Jenkins at 11:36 No comments:

In preparation for tomorrow's end of term service  the children of St James's School have been decorating the church for Easter. Well done to everyone for all their craft work, paintings, drawings and stories which now adorn the church: 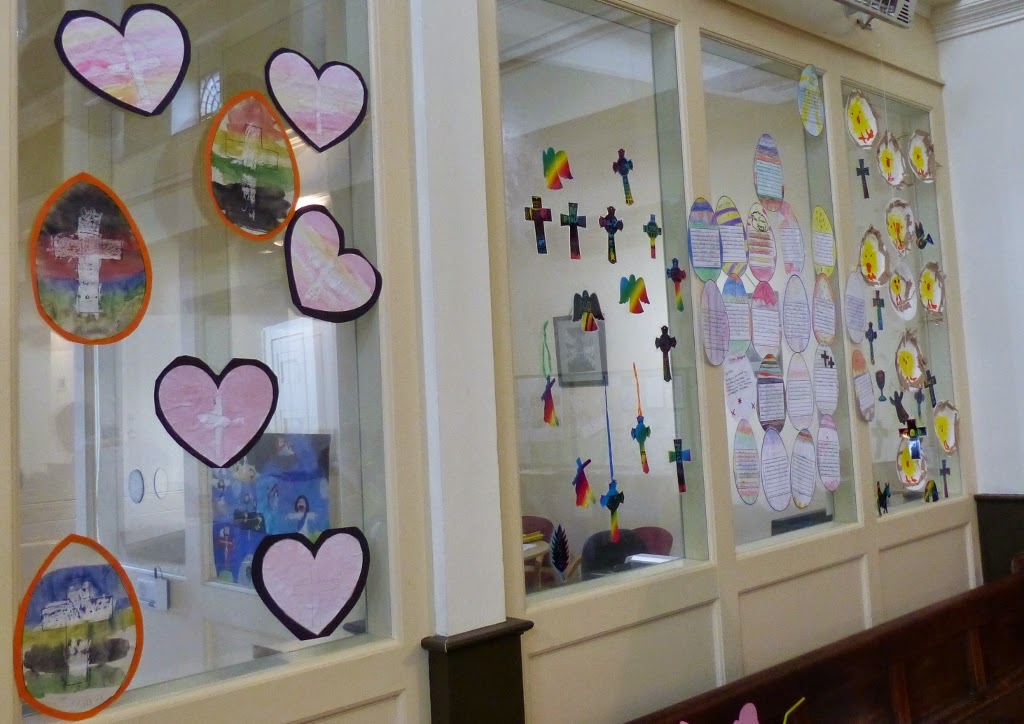 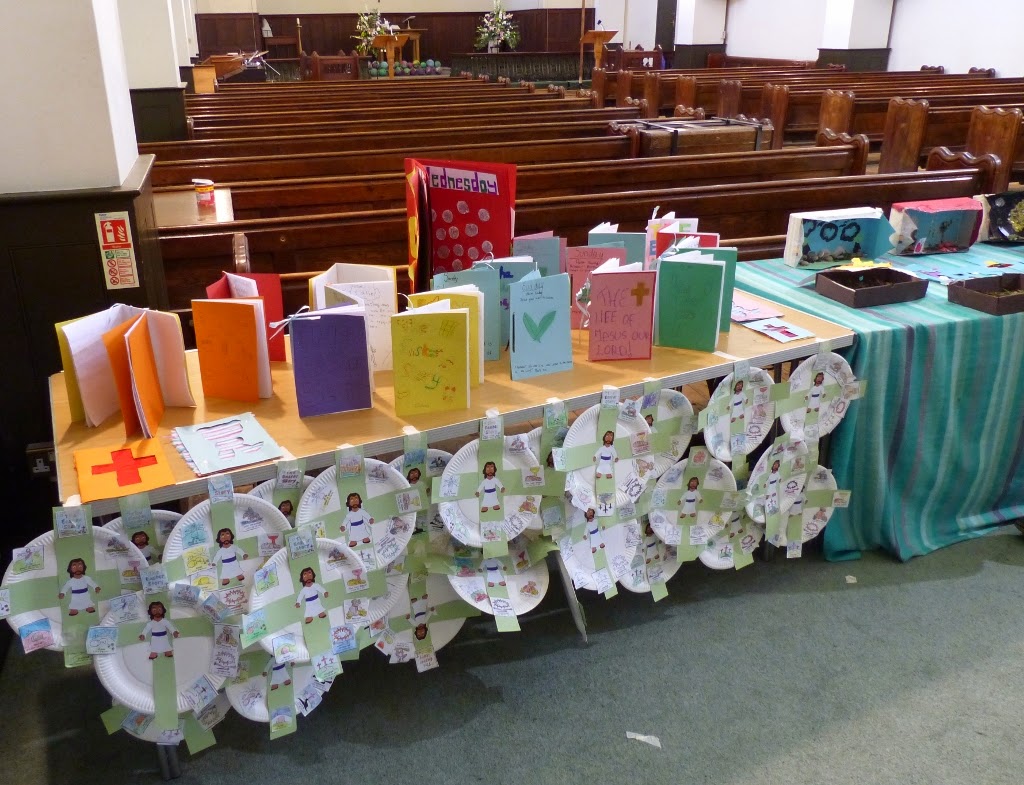 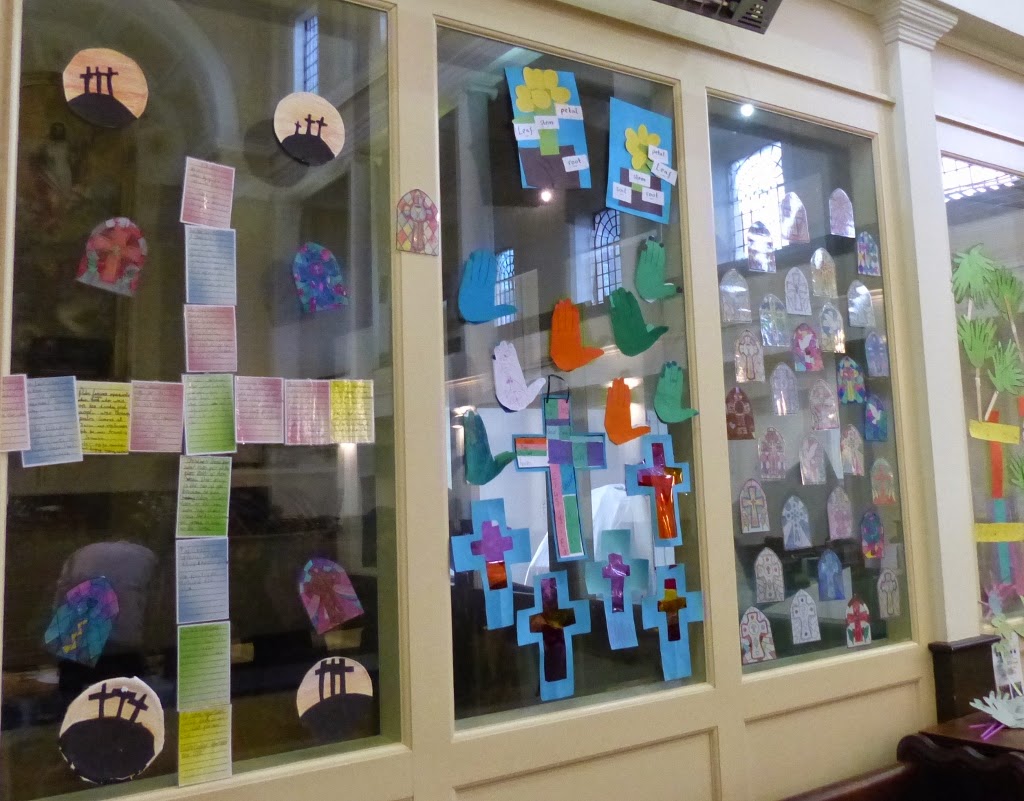 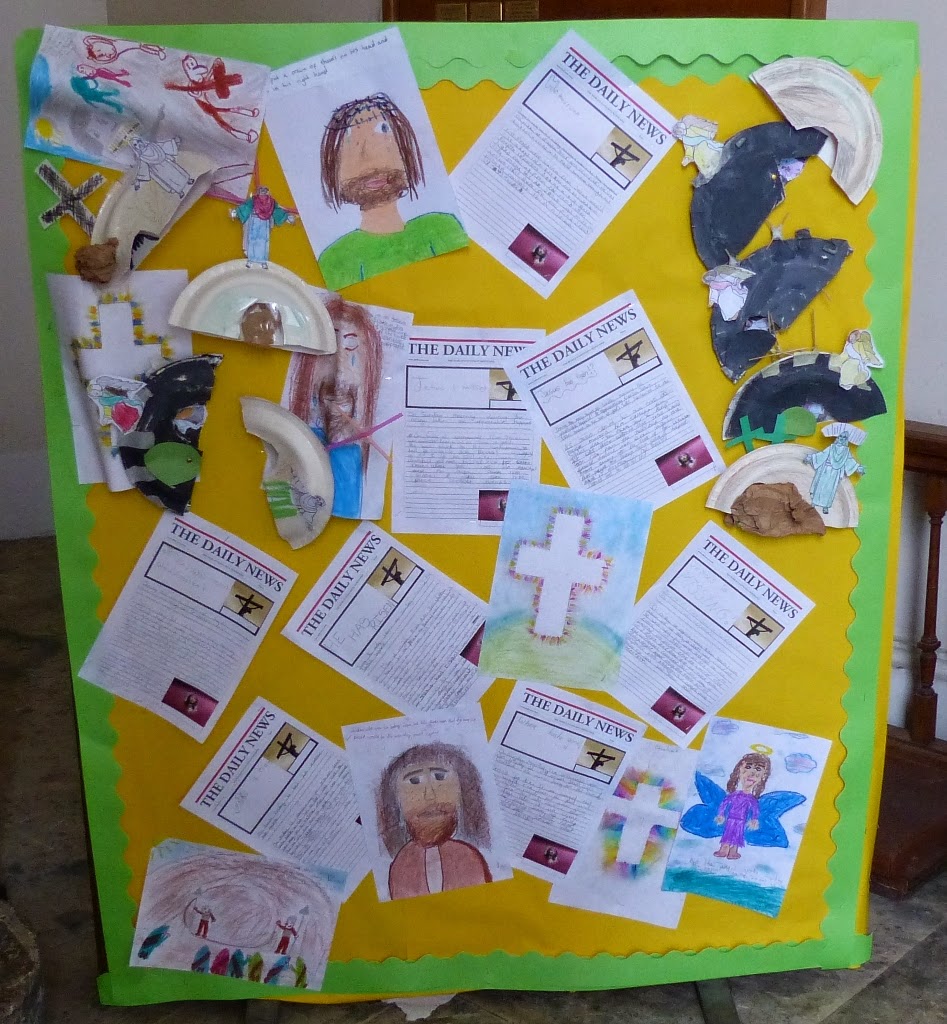 Posted by Gary Jenkins at 16:15 No comments: