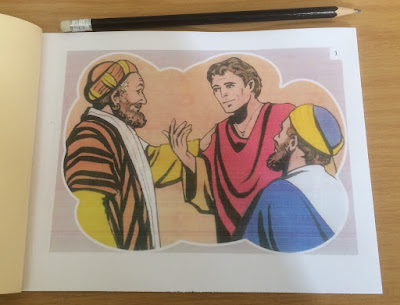 Key Stage 2 children from Riverside and St James's schools are coming a class at a time to St James's Church for our fourth annual schools week.

This year's theme is the Parable of the Lost Son from Luke 15.

The children move around to three stations.


At each station they hear the story told by one of the three characters in the story: the father, the older son, and the younger son, so that, by the end of the session, they have heard the story three times, but told each time from the angle of one particular character. 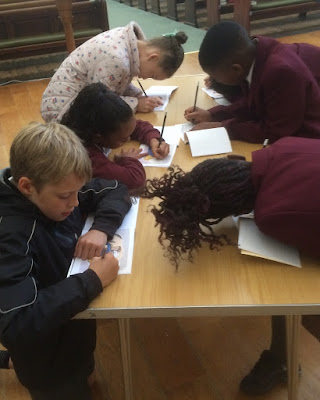 Having heard the story the children fill in speech bubbles in the book we have produced for the week, containing drawings of the principal scenes of the story (and the full text of the Bible story from Luke 15). Then they read out what they have written to the whole group.

We have had some wonderful contributions from the children.

Then we gather together to hear why Jesus told the story and who the three characters represent:

'In the story Jesus told, the father is like God who welcomes us and forgives us when we come back to him

In the story Jesus told, the younger son is like anyone who knows they have done something wrong and comes to God for forgiveness.

In the story Jesus told, the older son is like the Pharisees who grumbled about Jesus welcoming outcasts and even eating with them.'

Finally, each character has a final word.

The younger son says he really messed up and he couldn't believe it that his dad forgave him and welcomed him back,.

The older son says 'I am still angry. And I DON'T believe you should get a second chance.'

The father says to both his sons 'I have always loved you and I always will.' Then he turns to the older son and says 'If you mess up like he did' (pointing to the younger son) ' I would do the same for you that I did for him.'

It's been a wonderful week sharing this most powerful parable about our loving God and Father.