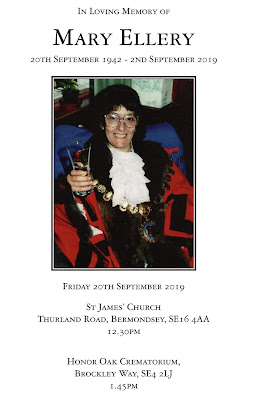 A large congregation gathered in St James yesterday to say to farewell and give thanks for the life of Mary Ellery.

Mary served for many years as a councillor for a ward in Peckham, culminating in her election as Mayor of Southwark in 1992.

She gave herself heart and soul to serving the needs of her constituents and working for the local community, whilst being involved in her local church where she served as churchwarden for many years.

Yesterday's congregation, in addition to her large extended family, included several former mayors of the borough, Sir Simon Hughes, and Harriet Harman, MP for Peckham and Camberwell, who gave one of the tributes. It was a life well lived with much to be thankful for.
Posted by Gary Jenkins at 08:43