Paul and I  first got to know Jon Westall when he came to be curate of St Peter's, St Helier in 1999. 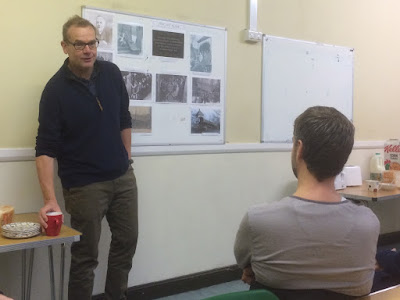 Twenty years later, Jon is the vicar of St Dunstan's in East Acton  and was the guest speaker at yesterday's men's brekafast at St James.

Jon grew up in a brethren family in Cardiff. His baptism by full immersion at the age of 14 was a powerful experience of the love of God for him personally.

A period teaching in Zimbabwe, was followed by a period teaching Physics in the UK, during which times the call to the ordained ministry became clear. Theological college followed and then our paths crossed for the first time when Jon came to be curate of St Peter's, the church of which I was then the vicar.

Speaking of some of the harder things that happen in life, Jon said that, although we often cannot fully explain them, we can be absolutely certain of the love of God on the basis of what God has already done for us and given us in the death and resurrection of his son.
Posted by Gary Jenkins at 13:59