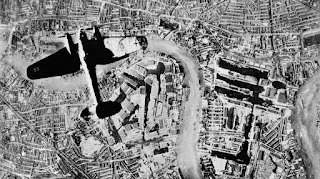 Eighty years ago this month the bombs started falling on Bermondsey and they continued to fall for 57 consecutive days.
The first day of the Blitz, 7th September, was a terrible one for our community with 23 people killed on Linsey Street and 29 dying when  Keeton School, which was being used as a rest centre, was hit. In all, in 1940 Bermondsey experienced 395 air raids in the space of three months.
Here is today's Bermondsey Daily Message from the crypt of St James's Church which was used as an air raid shelter during the war:

On the 80th anniversary of the beginning of the blitz Sir Simon Hughes said this on Twitter: 'We must never forget the price paid by our communities at home during WW2, always be thankful for the transformation of Germany into a great, democratic and peace-loving ally, & always be watchful & prepared should others use force to take freedom from their own people or others.' Wise words.
Posted by Gary Jenkins at 07:47